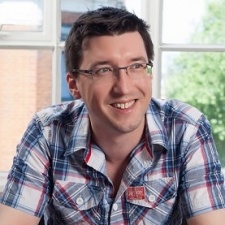 Virtual reality is a term that has brought about huge buzz in the games industry for years now.

And with devices now finally arriving to consumers, UK developer Future Games of London is bullish enough about VR's prospects that it is currently developing a version of its flagship Hungry Shark series for mobile VR platform Google Daydream.

But just how serious is the developer in its commitment to VR going forward? To find out, PocketGamer.biz spoke to Hall of Famer and Future Games of London Managing Director Ian Harper.

"As gamers, we’re very interested in the possibilities of VR here at FGOL, as is Ubisoft more generally," he says.

"VR presents a very interesting new market for us, a way to evolve gameplay and create new kinds of experiences. This naturally led us to Hungry Shark VR."

From touchscreen to headset

Hungry Shark VR will be based on Hungry Shark World, but bringing a mobile experience like this into VR is far from straightforward.

"With the gameplay fundamentally working in 2D - the challenge is to translate that to 3D and create a truly immersive experience.

"This means new controls, new viewpoint and new gameplay. They are all so tightly related that it takes great skill and a great team to make the transition successfully."

As it stands, the consumer VR market has not reached the heights in 2016 that many predicted.

In a surprise twist, augmented reality has come to the fore thanks to the release of Pokemon GO, with the technology now already having its mass market hit without the need for a dedicated headset.

But Harper and Future Games of London remain confident of VR's future.

"Virtual reality has the potential to bring more immersion to the players and, for that reason, it generates a lot of opportunities," he states.

"We expect VR to be huge in the long-term. There are so many VR platforms being released as we speak, and so much developer enthusiasm.

"We think that must translate into someone breaking through to the mass market and reach scale sometime soon. Specifically for mobile, the Daydream platform is in a great position to achieve this."

Future Games of London is preparing to announce a release date for Hungry Shark VR "in the near future".

Future Games of London is currently hiring for a dedicated VR Programmer.

Hall of Fame: From Amiga to mobile with Future Games of London's Ian Harper