Shooter and Iron Man showing the way forward for brands? 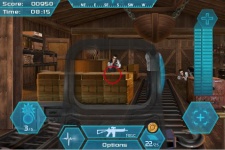 February 25th, 2009 - 01:40pm
By Stuart Dredge, Contributing Editor
The history of mobile games based on movies is littered with underwhelming or plain rubbish titles, and the frequent suspicion that operators and publishers care more about a big brand than they do about game quality.

Maybe that's why film-based games have been pretty rare on iPhone so far - an environment where word-of-mouth and user ratings play more of a role than they have done on other platforms.

(Or SHOOTER - THE OFFICIAL MOVIE GAME and IRON MAN: AERIAL ASSAULT if you want the official titles).

So what - besides shouty capitalisation - is fuelling their success? One interesting aspect is that despite both games having seemingly-high production values, they cost £0.59 / $0.99.

It's too early to make bold statements about movie studios seeing mobile games as (almost) pure promotion rather than big revenue streams in their own right, but that's certainly one implication of the two Paramount titles.

But it's also a warning to anyone who likes to generalise about "cheap 99-cent iPhone games" - even the biggest brand-owners are now looking to play in this space.