Nexus One week one launch sales estimated at 20,000 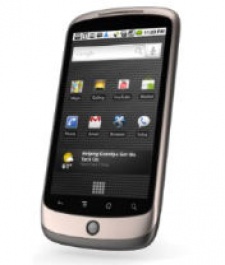 January 13th, 2010 - 03:59pm
By Jon Jordan, Contributing Editor
According to Flurry, the mobile analytics and monetisation company formed by the merger of Flurry and Pinch Media, around 20,000 of Google's Nexus One phones were in use during its first week of launch.

The calculation was made as Flurry tracks the use of adverts in mobile applications and can detect different devices including iPhone, iPod touch, and Android.

In comparison to the most recent big Android launch, Motorola's Droid, which sold 250,000 in week one, this is staggering low, but considering the Nexus One was only released in the US and launched using a different business and distribution model, perhaps slow week one sales were to be expected.

Indeed, Verizon spent around $100 million in marketing Droid, while T-Mobile didn't carry out much co-marketing for the Nexus One launch.

Concern about the termination costs and support won't have helped sales either.

You can see Flurry's estimated week one sales of Nexus One versus Droid, myTouch 3G and iPhone 3GS below. 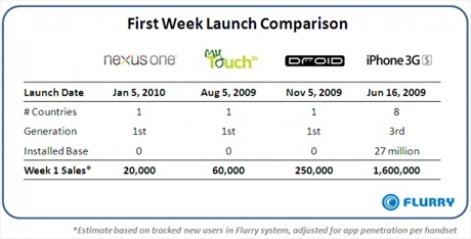 Still, with Google focusing on its direct-to-consumer website approach, which entails a $529 price tag, it looks like Nexus One will be a case of slow and steady.