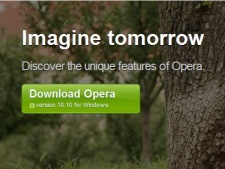 February 17th, 2010 - 04:33pm
By Keith Andrew
When it comes to web browsers on iPhone, it's fair to say the choice is quite limited. Though alternatives to Safari, which comes pre-installed on all units, have populated the App Store over the last year, most are from smaller outfits - the likes of Firefox, Chrome, and Opera are absent.

Until now. Opera has been showing an iPhone version of its browser at the Mobile World Congress in Barcelona and, despite not yet submitting it to Apple for App Store approval, the company is confident of its chances.

"Opera's mission is to bring the Web to the world," Opera Software co-founder Jon von Tetzchner told App Insider. "By making Opera Mini available on yet another platform, we are one step closer."

But does Opera really stand any chance on making it onto the App Store?

Apple has so far blocked any moves to launch non-WebKit open source project based browsers on iPhone, and Opera has even dismissed rumours that the two parties have been co-operating with each other on Opera Mini.

"We haven't worked with Apple on it yet," Opera spokeswoman Falguni Bhuta told the site. "We haven't submitted it to the App Store."

As far as anyone is aware, Apple's stance on rival browsers has not changed, suggesting any submission by Opera would be routinely rebuffed.

The belief is that Apple is concerned that Safari would soon become replaced if it allowed any of the big players onto the App Store - claims by Opera that its browser runs six times faster than Safari over 3G no doubt fuelling such worries.

However, Opera officials reportedly believe there is no logistical reason for Apple to block Opera Mini.
App Insider