July 5th, 2011 - 12:18am
By Keith Andrew
Having only lifted the lid on its first round of processors pitched directly at tablets at the start of June, AMD's plans for the next year and a half have been laid bare by a leak.

Turkish tech site Donanim Haber has managed to get hold of the American firm's roadmap for 2012, which details a follow up to the current Z-Series Fusion APU, dubbed Desna.

The new processor family, codenamed Hondo, will have a greater focus on tablet devices, with non-essential PC-friendly features currently sported by Desna ditched to streamline its set up.

Set for the cut are VGA output, PCIe support and some USB pathways. But the change won't be all one way.

According to the roadmap, AMD will add an 'active stanby' mode that will enable tablets to maintain connectivity while simultaneously reducing power draw and thermal design power (TDP) by around a third. 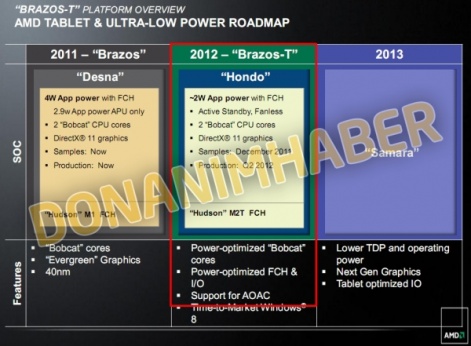 Set for production in Q2 2012, its launch will be timed to match that of the equally tablet friendly Windows 8, itself due to make its debut in the second half of next year.