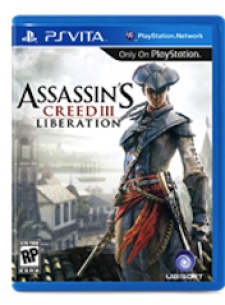 In a major announcement, the company dedicated a section of its pre-E3 press event to showcasing Assassin's Creed III Liberations.

The Ubisoft game is a spin-off of its upcoming console release Assassin's Creed III, and will be released on the same day as that title  30 October 2012.

A special bundled release of Liberations will be available featuring what Sony terms a 'crystal white' PS Vita, complete with a 4GB memory card. Players who own both the PS3 and PS Vita versions of the game will be able to synchronise them to unlock extra content.

In addition, Sony said that a PS Vita-exclusive Call of Duty title  Call of Duty Black Ops Declassified  will be released for Vita in the holiday season (which translates to Christmas time in Europe). Publisher Activision has yet to give any further information, including the developer of the title.

Sony also gave us a glimpse of PlayStation All-Stars Battle Royale, which it transpires will be available for PS Vita as well as PS3.

Demo footage of the game at the pre-E3 event was significant in that it showed two PS Vita owners challenging two PlayStation 3 players, emphasising the 'cross play' capabilities of Sony's gaming network.

Sony America's President Jack Tretton said that some 60 titles will be available for PS Vita by the end of 2012, but it's not clear exactly what these games will be.

There are already roughly 40 games available for PS Vita, so on the face of it a move to 60 isn't exactly a deluge of new content to see the year out.

At least PS Vita owners will soon be able to relive the 1990s, with Tretton also announcing that PlayStation One classics such as Final Fantasy VII and Crash Bandicoot are to be made available for its handheld, following in the footsteps of its expanding PlayStation Certified programme.

Away from games, Tretton claimed that US streaming service Hulu Plus and its own Crackle network will be hooked into PS Vita "soon".

Here's the close up from Pocket Gamer's E3 party