With GungHo now worth more than Zynga, is GREE or DeNA about to buy big again?

January 28th, 2013 - 03:41pm
By Jon Jordan, Contributing Editor
Do we need another demonstration of how free-to-play mobile games are generating huge amounts of cash and changing the entire market?

Well, we're certainly going to get them, and this week's example comes courtesy of Japanese publisher GungHo Online.

It's being in the business for over a decade, most famously running the Japanese servers for Korean online game Ragnarok.

It's also something of an umbrella organisation, operating developers such as Game Arts, Acquire and Gravity, not to mention recent US subsidiary GungHo Online Entertainment America.

And on that level, it's a fairly substantial company, with revenues of over $100 million in 2011.

So - as pointed out by Japanese consultant Serkan Toto - how come GungHo (current market cap $2.2 billion) is now worth more than Zynga ($1.98 billion)?

One answer is its free-to-play game: Puzzle & Dragons.

Downloaded over seven million times on iOS and Android, the RPG/puzzler has been the top grossing app on the Japanese iPhone App Store since March 2012.

It's since been released in Korea and North America (not yet Europe), although Japan provides the vast majority of revenues.

Of course, we don't know how much revenue GungHo Online (3765:JP) is generating from the game, although we will get to see its 2012 financials before too long. 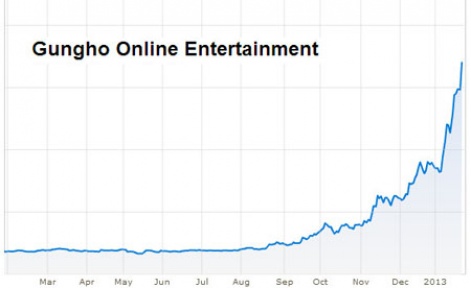 Plus, it's always worth pointing out that a valuation based on share price is a product of market sentiment not necessarily underlying economics.

For example, DeNA or GREE could be trying to buy the company, artificially raising the share price.

Nevertheless, it still remarkable that the success of one game with less than 7 million active users can boost its publisher's worth past that of global player such as Zynga, which has around 200 million active monthly users.

The Chinese government is backing a new virus killing game