Ian Livingstone: Nintendo risks losing an entire generation unless it works on other platforms

Firm's IP should be on 'every platform' 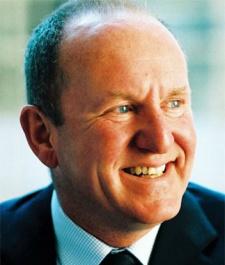 June 5th, 2013 - 11:54am
By Peter Willington
Nintendo should take its games to "every platform" in a bid to ensure that an entire generation of gamers don't miss out on the Japanese giant's IP.

That was the take of industry veteran Ian Livingstone as he opened proceedings at Bristol Games Hub, a non-profit organisation designed to offer space for developers and academics in the South West of England.

Livingstone  life president of Eidos, and best known for his work on the Fighting Fantasy interactive book series   used his speech at the event both to offer guidance for developers just starting out, and to give advice to one of the industry's biggest players.

"Nintendo should have their IP on every platform," said Livingstone, arguing that strengthening IP should take precedence over the health of the publisher's platforms.

"Otherwise a whole generation of young people will miss out on their games."

It's no secret that gamers are now spending more on smartphone and tablet games than on traditional handheld games, and with Nintendo's deep catalogue of IP many would like to see the Japanese giant move into the mobile and tablet space.

Investors in the company have also previously called on Nintendo to begin work on mobile  calls that have become louder in some quarters during tough times for both the Wii U and the 3DS.

"This is absolutely not under consideration," Nintendo CEO Satoru Iwata said of possible smartphone development back in September 2011.

"If we did this, Nintendo would cease to be Nintendo. Having a hardware development team in-house is a major strength. It's the duty of management to make use of those strengths."

This was a stance backed up at the time by Nintendo of America president Reggie Fils-Aime.

"The concept of having our core franchises on other systems really flies in the face of what we believe in, and that's because, by understanding the hardware, that's how we're able to bring these great experiences forward," he concluded.

While Nintendo seems unlikely to take Livingstone's advice, the industry veteran also took time out in his speech in Bristol to trumpet the need for the business to foster talent at a young age at the education level.

He also stressed how crucial it is for studios to develop their own IP rather than focusing solely on work-for-hire.

IP is king, remarked Livingstone, and producing original content is the only way studios can produce lasting value within their own companies.
You can find out more about the Bristol Games Hub on the organisation's website. Reply
Mathew Reed
"Content is king but if Nintendo doesn't start sharing its content corss-platform it will even up like Sega - a pale shadow of itself."

People tend to forget that SEGA failed because they released multiple consoles that sold under 15 million. In fact, only one of their consoles ever sold over 15 million worldwide (the Genesis/Megadrive). SEGA also made the mistake of having a 2 year console generation life of the SEGA Saturn before releasing the SEGA Dreamcast, which was a big risk that failed them. Nintendo is nowhere near SEGA's situation, the 3DS is doing fine, and I am sure once Nintendo's first and second party games start getting released on the Wii U, it will pick up steam too.
Posted 8 years, 3 months ago

Reply
Joshua Shaw
*facepalm* x2
It's funny seeing articles such as this.
Posted 8 years, 3 months ago

Reply
RM87
He should go fuck himself
Posted 8 years, 3 months ago Linking to a bias and false study doesnt help

"calls that have become louder in some quarters during tough times for both the Wii U and the 3DS."

Reply
Josh Dombro
So @Phil Maxey alluded to this, but I have a (somewhat) serious question: Which is more likely, Nintendo to allow their games on iOS/Android, or they create their own phone/tablet system? They keep talking about their hardware, but we're not seeing real results yet...
Posted 8 years, 3 months ago

Reply
Jason Lacour
I guess you guys forget that Nintendo's IPs sell upwards into the millions on their platform because of their built up fanbase, and that porting their own IPs would fracture that fanbase and sales. Look at Animal Crossing selling 1 million copies in less than a week and now has reached over 3 million copies, and that's just Japan alone. We could see a big hit in EU/US as well.

Also @Jon jordan, yes, lets look at SEGA. They failed multiple times before getting it right with the Dreamcast but it wasn't enough to turn anything around for the better. And lets look at the quality of games they had and they're decline when they didn't have a home platform. Sonic has only recently gotten better as a series and doing much better sales wise and you wanna know where most of their sales come from? Nintendo platforms. Looking at Sonic Colors, it sold 1.84 million in the first month compared to Sonic Generations (a multiplatform that only made it to one Nintendo platform, 3DS) sold 1.84 million after a whole year and most of those sales were from the 3DS version. Sonic Racing Transformed (another multiplat) even sold more on the Wii U and 3DS compared to the other platforms. That's saying something really, Wii U is 1/25 the fanbase of the other consoles but still Sonic outsold them more on Nintendo hardware.
Posted 8 years, 3 months ago

Reply
Alan Mail
This is a really dumb guy
Posted 8 years, 3 months ago

The famous industry saying, but it's really evolved. If content is king, multi-screen is queen. :)

"Sadly Nintendo really doesn't get Games as a Service - i.e. it's the games that matter not the hardware."

I think Nintendo gets software (many of their games are very well designed), but what they really lack in my opinion is selling emotion over content in the GaaS model. Nintendo did well selling games (content) that you really wanted to play, but they can't keep selling a new level pack or the same game with new aesthetics (I'm looking at you Zelda and Mario). This is all just content... they need to focus on the emotional connection with the player.
Posted 8 years, 3 months ago

Reply
jon jordan
Sadly Nintendo really doesn't get Games as a Service - i.e. it's the games that matter not the hardware.

Hardware is now a commodity business as even Apple is finding out. Content is king but if Nintendo doesn't start sharing its content corss-platform it will even up like Sega - a pale shadow of itself. Reply
Mayu Polo
"The concept of having our core franchises on other systems really flies in the face of what we believe in, and that's because, by understanding the hardware, that's how we're able to bring these great experiences forward," he concluded.

So is he saying that they don't have the capabilities to understand other platforms like iOS or Android? I think they are going to lose this war that they are fighting. Already the only people I see around with a 3DS or similar are people of my generation (in my 30s) that hang on to Nintendo for nostalgia reasons.
Posted 8 years, 3 months ago

Reply
Phil M
Nintendo could kill two birds with one stone by releasing a Nintendo phone or tablet. The Wii U was sinking even before the announcements of the new MS/Sony consoles, now it's public profile is even less. If Nintendo don't do something different soon (new hardware release etc) than it's inevitable it will become a software only company. What's happening to it right now is uncannily similar to what happened to Sega, although I think for obvious reasons Nintendo would actually do better than Sega as a software only company.

And yes! always look to create your own IP, it's certainly more fun.
Posted 8 years, 3 months ago