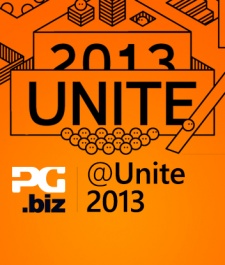 August 30th, 2013 - 10:10pm
By Keith Andrew
The title of Unity marketing director Darren William's talk at Unite 2013 may have been deliberately provocative  'marketing sucks'  but it's unlikely anyone who witnessed his presentation will have left with that view.

Williams spent most of his time on stage in the Vancouver Conference Centre attempting to smash through marketing myths, saving indies from making the same old mistakes time after time.

Perhaps the most salient point, however, was Williams' belief that developers need to move away from the idea that they need to target mass market consumers from the get go.

"You don't have to reach everyone on day one," said Williams, stressing the importance of developers getting their message right  exactly what they want to say about their game  before communicating with anyone.

Getting the innovators on board

It's Williams' belief that developers can foster far more success for their games if they focus their early marketing efforts on targeting 'innovators'  the "guys who have the word of mouth power."

"This is a small audience, very opinionated, incredibly technically aware  particularly for the nature of our business," continued Williams.

"They're difficult to reach, but once you do, their influence, their word of mouth, their ability to validate the product is much, much higher.

"So what has started to happen is, some of the smarter studios have realised that, rather than trying to get right to the massmarket through spending, muscle and brute force, it's actually far better to try and court this innovator.

"If the innovator gives you a big thumbs up, then it's likely early adopters will also be willing to take chance on it. That will then start penetrating into mass market awareness."

Interestingly, Williams noted that this is exactly the same approach that Unity itself took when it started out.

"This is exactly what Unity itself went through," he concluded.

"The product 6 or 7 years ago was very, very small in terms of adoption. It had a core community of very intelligent and very passionate consumers, and it's grown, grown, grown. It had a small audience, it took some time to grow, and then it exploded."

Taking to the stage after Williams were his colleagues Unity PR manager Dan Adams and developer relations specialist Tracy Erickson, who both took time to focus on public relations  something Adams noted is something of a different beast to marketing, though the two are often confused.

"A lot of public relations is about building a message at the core and tying it in with everything you talk about  social media and the press," opened Adams.

Erickson agreed, noting that that's a big difference between communicating and having a message.

"Developers say, 'we know we need to reach out to the press' and 'we know we need to communicate with communities and start that process before we launch our games', but if you reach out and start talking about your game without actually having sat down and thought about what your message is  what it is that you actually want to say and put out there  then you're missing the point," he added.

It's all about focus, both Adams and Erickson stressed.

Don't waste journalists' time with waffling, or push out press releases full of bullet points simply listing game features. Do any of that, and you'll lose their interest  potentially for good.

It's all about looking beyond the mechanical to determine what makes the game in question magical, and then conveying that in the simplest, most effective way possible to a targeted audience of relative gamers and journalists.

"You get people who will email a journalist and say 'my game has 15 different types of weapon," added Adams. "Who cares about that?"

What's more, if pitching to a journalist, the demo in question shouldn't last any longer than 10 minutes and should be designed to push these key points, added Adams.

Don't waste time finding the right level or skipping through half the game to get to the good bit  be prepared, and just jump straight to what you want to show.

"I remember being shown games when I was at IGN where the presentation would last 40 minutes or so, and I'd be sat there looking at my watch and tapping my foot waiting to go," added Adams.

"It sounds harsh, but these guys [journalists] have a lot of other things to do, a lot of games to see. There are a lot of games out there, and you're competing with a lot more people than you ever were before, so finding 3-5 key messages is really important."