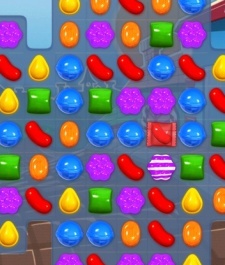 A year after it made what's been an especially rewarding shift to mobile, King has revealed that  across smartphones and Facebook combined  Candy Crush Sagahas been downloaded 500 million times.

Said number has been backed up by further stats released by the firm, including the revelation that those half a billion downloads have led to 150 billion play sessions.

Crucially, King hasn't revealed just what level of revenue the game is generating, though Think Gaming pegged the game's daily revenue rate at around $875,000 on iOS in the US alone back in October.

The news comes days after King's games guru Tommy Palm was inducted into the PocketGamer.biz Hall of Fame, with Palm claiming he was "very proud of having had a small part of creating the world's most popular game, Candy Crush Saga."

"I think that social functionality in mobile games is still in its very early days. We will see more social phenomena such as Candy Crush Saga because people really like doing the same things as their friends and family," he added.

"I also think that the biggest inventions will occur in terms of usability. That was the main reason for the success of the iPhone."

For future success, Sweden's next generation of games gurus go back to the Cabin

Risk equals reward: King's Tommy Palm on heading east and tapping into the next generation