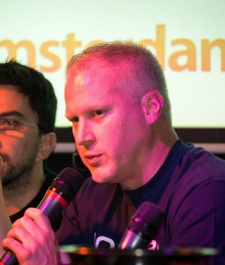 Casual Connect Europe may currently have Amsterdam in its grip, but Pocket Gamer was in the Dutch capital on Monday night to spark off the action a few hours early.

In front of hundreds of attendees, a collection of industry experts gathered on stage at Akhnaton in the heart of the city to discuss the burning issues of the day.

(You can check out our photo gallery on Facebook.)

Naturally, it wasn't long before the issue of Flappy Bird was raised. For the record, Steel Media MD and host for the night Chris James has score of 26.

"There's an element of luck in it, but there are parts of it that makes sense," offered Rob Barnes, VP of business development at Marmalade. "It was always going to get a bit of a boost playing on the bird brand, and the frustrating nature of it."

For Matt Zitzmann, CEO of video sharing platform Kamcord, it was Flappy Bird's "staying power" that has really impressed. Well, until the developer that pulled the game, that is.

"Go on Vine and do a search for a Flappy Bird tag," he added. "It's amazing. Every minute the are two to three new Flappy Bird videos being shared."

So, why is video such a force for game discovery?

"Our philosophy is the best way to market a video game is with video," Zitzmann went on. "What better way to not only show off their high score than to their friends. Facebook click-through rates are 20 percent. People not only enjoy sharing  we've had a couple of million shared.

"You want to build your community early on  you don't see movie ads the day it goes live. It's about creating that water cooler effect."

The users at the heart of your community are 'sharers'  consumers who, without prompt, promote your games to their friends via social networks. According to Edward Laws of ad network InMobi, sharers are your most important users.

"If you have analytics in your apps, you'll be able to segment your 'sharers', and you can treat them differently to non-sharers," he added. "You need to treat these users really well."

But there are some things developers can do to promote their games effectively via social media off their own back.

"Devs can create a lot of news around what they're doing just by using Facebook and Twitter," added JP van Seventer, development director at Dutch Game Garden.

"Look at Vlambeer  they turned the cloning of Radical Fishing into a PR masterclass. Ridiculous Fishing became a tale of redemption  this giant emotional thing, and users were like 'we've got to support this thing and get behind them'."

If all else fails, of course, there is always advertising.

"I'm not here to say you should always advertise," said Laws of InMobi. "If you're doing really well organically, there's no need to rush into it.

Perhaps the most interesting issue of the panel, however, was raised by one of the spectators. Can controversy sell?

The developer who asked the question was a studio working on a Valentine's app that features a gay man and a lesbian as its lead. Would such a strategy generate heat?

The panel was undecided, leaving host - Pocket Gamer's Chris James to have the final say: "So, you're aiming that app at Russia, are you?"

The Godus amongst us: Molyneux talks free-to-play farces, winning without chasing whales and his top score on Flappy Bird