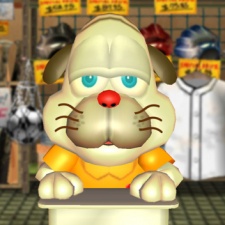 Nintendo of America has pushed out download links for one of its free-to-play titles directly to 3DS owners' home screens.

The game in question, Rusty’s Real Deal Baseball, is a collection of baseball-themed mini-games that Nintendo first announced back in February.

Early in May, 3DS owners who opted into Nintendo's SpotPass feature received a new software notification that turned out to be a link to the eShop to download Rusty's.

This new software didn't push out a full copy of the game, and it wouldn't circumvent any parental controls for purchasing on the handheld.

Swinging for the fences

Rusty's Real Deal Baseball is a unique game in its approach to monetisation.

Players pay to unlock new mini-games via in-app purchases, but the "real deal" comes from haggling with the hangdog cartoon proprietor.

This haggling soon becomes a game in and of itself, as players will need to interact with Rusty, listen to his problems, and - when all else fails - bribe him with donuts in order to win him over.

Equally interesting is the fact that players are actively encouraged to haggle with Rusty for IAPs. If a player attempts to buy a game for its full asking price, a member of Rusty's army of children steps in to dissuade them from that course of action.

Conversely, players are also told when they've reached the lowest point that Rusty will aceept for a given mini-game.

This new SpotPass initiative might be a lucrative channel for Nintendo to explore with future free-to-play titles if Rusty's succeeds in tempting players to spend on IAPs.