Rex Crowle on crafting a world for fun 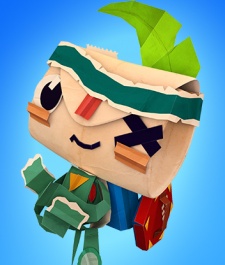 Tearaway's  charming papercraft world demands your love and attention. Its curious design will melt the heart of even the most serious gamer, and that, according to Rex Crowle, lead designer at Media Molecule, was exactly the point.

“We really strived to build the world around the player. We wanted to engage the player and make them part of the game. Basically, we wanted to spawn joy,” explained Crowle, speaking at this year's Develop conference in Brighton.

“We didn't want it to simply be our world. We wanted the player to feel like it was their world and their story by the time they'd finished playing it.”

Media Molecule's jump to handheld was an inspired one, with the team convinced that Sony's PS Vita was the perfect device to house a real, tangible world.

“We'd never made a handheld game before. We'd made games that you access by sitting on your sofa,” said Crowle.

“The Vita is covered In sensors, and has so many inputs, so it felt like there was a lot of potential to bring the game inside of the console and make it feel like the world [really exists].

“If you could tear a hole in a game, it's a very specific way of crossing a barrier and breaking through the fourth wall.”

Interaction was at the forefront of the team's mind, and they wanted to make fingertips - a part of the body that's often neglected, despite being the focal point of modern gaming - the star of the show.

“We were interested in fingertips, because they represent our body type, our skin colour, and our fingerprints,” offered Crowle.

“They're unique, but it feels like fingers are losing out in the digital world. They're constantly on these shiny surfaces, and we wanted to help them break through that glass ceiling.

“That was the starting point. We wanted to make a handheld game that actually featured your hands.“

"Your fingers in our papery world"

Interaction on it's own, though, wasn't enough. It had to feel real, and the only way to make that happen was by bringing in a new character.

“We needed to have a character inside the game witnessing your interaction. That's what makes it real,” said Crowle.

We didn't want to challenge the players, we wanted them to feel good.

“Unfortunately, that meant the player was starting to disappear. The times they actually interacted with the world became few and far between.

“So, by stepping back and getting to the core of this fourth wall breaking stuff, we could right that wrong.”

By hosting a game jam built around the theme of 'a world in your hands', the team was able to balance the equation and thrust the player back into the spotlight.

It was at this point that the developers realised that they didn't want to create a 'game' in the traditional sense of the word.

They didn't need to challenge players, or have them overcome obstacle after obstacle.  Instead,  they simply wanted to ensure that anyone who picked up Tearaway had an entertaining, unique, and totally personal experience.

“Ultimately, we didn't want to challenge the players, we wanted them to feel good,” said Crowle, “it was just more interesting to let players do what they wanted to do.”

You can find out more about how Tearaway was concieved by clicking right here.

Tearaway comes out on top at BAFTA Games Awards 2014

Unfolding story: The making of Tearaway

Mobile in Malmo: The city where the big rub shoulders with the small