Why Supercell built a company of startups, and how it works

Ilkka Paananen shares his philosophy for mobile games development, and why it might not work for everyone 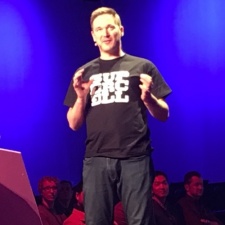 Supercell CEO Ilkka Paananen has shared his vision for Supercell and why its internal startup culture was developed after years working with as many as 400 staff at Digital Chocolate.

Speaking at RovioCon 2017 in Helsinki, Paananen discussed his first 10 years in the games industry as CEO of Sumea and then eventually President of Digital Chocolate following the latter’s acquisition of the former.

After falling into the games industry almost by accident, given his analytical background and university friends pursuing careers in investment banking and management consultancy, Paananen grew Sumea to a team of around 40 staff before selling to Digital Chocolate.

During his six years there, Paananen built a top-down organisation with a small group of people making the ideas, which he described as neat on paper, with lots of processes, everyone in a box and ‘under control’.

By the time he left, the company had grown to around 400 people, with the complexity of the environment increasing.

Despite trying to introduce layers of soft management and procedures to keep things under control, after a while he noticed issues related to the firm's processes, including the greenlight process for developing new games.

This required senior staff and/or teams to create big documents explaining the business plan and case for a game, including the market opportunity, competition, niche, etc.

The purpose of the document was not to make a better game, but to get the whole company buying into the project, from the head of marketing, to sales and finance. This would then lead to monthly reviews with lengthy phone calls to convince people of the game’s potential.

He found however that the reality is only game creators know about the game, and most new titles “suck”, but after some work may progress into something great, but that process needs time.

This issue with processes was exacerbated by growth as people got promoted, got new teams and more management layers were added.

After some time, Paananen said he realised he may have been thinking about things the wrong way. Games are part of a creative industry, not science, he said.

He added that no matter how well organised your team, presentation or process, this doesn’t produce great games.

Therefore, he decided to see what a developer-led team would look like, turning the company pyramid upside down to give management the role of building teams and supporting them, rather than running them - something he's tried to achieve with Supercell.

This is more akin to running independent startups within the company. After someone suggested these were like ‘cells’, his new studio's name of Supercell was born. It's since gone on to develop hit games such as Clash of Clans, Hay Day, Boom Beach and Clash Royale.

Paananen believes that the scarcity of resources in small teams can increase innovation and focus. If only two programmers are on a team, they’ll need to focus on what they can do with what they have. You don’t need 100-man teams on mobile like you do for console, he said.

On other flip side of the coin to independence however is responsibility. Supercell has a very high bar for games to be greenlit, and if something isn’t working out, it will kill the game or make changes to the team.

Paananen noted that there are some challenges presented by Supercell’s philosophy, and cautioned the model may not work for all companies, nor is it necessarily the best model for others to follow.

He said it works best for people that are super proactive and likely could be entrepreneurs themselves and form their own companies, people who don’t need a boss to tell them what to do.

While small teams and a lack of much process and management can lead to great innovation, it can also cause stress.

Given Supercell’s philosophy of staying small, it needs to say no to a lot of game proposals, given the high bar to get the greenlight. He admitted that people could work for many years at Supercell and their game won’t come out.

Previously, Paananen has said it canned a game called Smash Land, which he felt could have been a top 25 grossing game - but still didn't meet internal expectations.

Paananen said during RovioCon however that the company does try to address this issue by rotating employees and being upfront about it from the start during the interview process.

Paananen concluded by saying that the company’s structure is an ever-evolving thing, and should the developer last for many more years or even decades, the process will likely evolve too.