Teams up with tech outfit Lenovo to produce new hardware 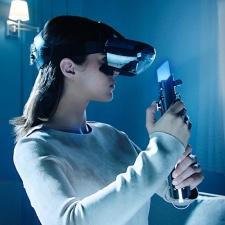 Disney has teamed up with technology firm Lenovo to develop a new smartphone-powered augmented reality headset.

The headset was unveiled during the D23 Expo where Disney teased its Star Wars: Jedi Challenges games, which will layer the game's action onto the real world.

The game is said to include Holochess – first seen being played by Chewbacca and R2-D2 in Star Wars: A New Hope.

A peripheral in the form of a lightsaber was also shown off giving users the impression they’re wielding the famous sci-fi weapon for real.

Not many other details have been provided other than the headset is “coming soon” to retail in the US.

You can watch a teaser trailer below.