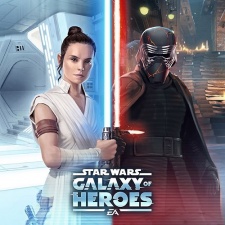 Star Wars: Galaxy of Heroes from Electronic Arts has made up approximately 98 per cent of the last five Star Wars mobile games overall revenue.

The top country for Galaxy of Heroes' revenue was the US at $732.5 million, or 62 per cent of all player spending. Players in Germany then propelled the game to second spot while the UK then forced its way to third position.

It's a ginormous number. One that has proven the continued success of Galaxy of Heroes since its launch in November 2015, and perhaps the failing of its other counterparts. The highest revenue maker of these remaining games was Netmarble's Force Arena at $13.8 million, which originally launched in January 2017.

Uprising from Kabam then followed in the third spot at $7.4 million, before Puzzle Droids from Genera Games secured fourth at $1.9 million. Zynga's Rebels: Recon Missions subsequently rounded out the group with $647,000 through player spending.

Note: Outside of Galaxy of Heroes, all of these games have now been declared inactive by Sensor Tower.

Disney and Lenovo also launched Star Wars: Jedi Challenges during this same period, an augmented reality game for smartphones that let users take part in lightsaber duels. While the experience has accumulated 1.5 million downloads and is still considered active, it has not earned any money so far via in-game spending.

Jedi Challenges appears to not offer any in-game purchases but does require a Lenovo Mirage AR headset, tracking beacon and lightsaber controller. All of which were originally sold in a starter pack for $200 when released in November 2018.

Similar to Galaxy of Heroes, the US stormed to first for Jedi Challenges with 651,000 installs or 44.1 per cent of the total. The second and third spots then went to the UK and Germany respectively.

An unfounded estimate would be to say that Jedi Challenges earned $300 million at best in revenue, taking into account the RRP of $200 and total downloads at 1.5 million. However, the price has dropped several times since release (now available for $29) and anyone can install the app without purchasing the starter kit.

When it comes to downloads across all six games, the library has an estimated 109.3 million installs to-date, or 107.8 million if you exclude Jedi Challenges.

Unsurprisingly, Galaxy of Heroes leads the line at 78.5 million installs, representing close to 78 per cent of total downloads. Again the US amassed the largest number at 19.2 million installs or 24.5 per cent of the group. Russia, however, ranked as the runner-up for downloads with Brazil following behind in third.

Force Arena then placed second for total installs at 12.7 million, though represented a strong average spend per download at $1.06. Third and fourth positions for downloads went to Uprising and Rebels: Recon Missions at 10 million and 4.9 million respectively, with Puzzle Droids rounding out the group at 1.7 million installs.

Previously, Star Wars: Galaxy of Heroes helped force the series to over a billion in revenue on mobile by December 2019.