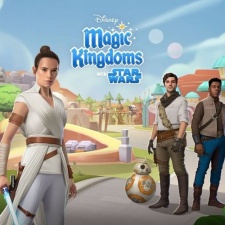 Gameloft has rolled out a limited-time event that will see content from Star Wars: The Rise of Skywalker appear in Disney Magic Kingdoms.

The update to the mobile theme park designer will coincide with the latest film release in the space opera franchise and continues the ongoing collaboration between the French publisher and The Walt Disney Company.

A new park expansion with locations inspired by Hoth, Endor, Jakku, and more will be made available, alongside the introduction of numerous iconic heroes and villains. Characters set to feature include Rey, Poe, Finn, R2-D2, C3PO, BB-8, General Hux, a First Order Stormtrooper, and Kylo Ren.

Players can also add attractions based on X-wings or the Resistance Speeder. During the event, quests can be completed to help fight Kylo Ren and The First Order, which in turn will reward users.

"Working with Disney to bring their latest instalment of the Star Wars galaxy to our game has been a magical experience. We hope players will enjoy this amazing addition for Disney Magic Kingdoms – I have a good feeling about this!"

Gameloft has once again teamed with Disney for a new mobile island puzzler, known as Disney Getaway Blast. The game was recently soft-launched Canada, Ukraine, Hungary and Romania before subsequently being delayed to a 2020 release.

We recently spoke to Jam City concerning its partnership with Disney and why the company believes its own game, Frozen Adventures, is not just another tie-in.