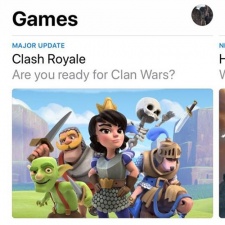 Getting your game featured in the iOS 11’s US App Store Games Tab can lead to a 450 per cent increase in downloads, according to a recent report by Sensor Tower.

The mobile intelligence firm looked at games featured across Hero Banners, Videos/ Screenshots, Medium Lists and Small Lists on the Games Tab from September 2017 to April 2018 and cross-referenced the downloads to before they were featured.

While the hero banner featured most prominently with the largest number of median weekly downloads at around 20,000, it provided the smallest percentage of growth with 236 per cent.

The largest increase in percentage was seen in the Medium List as a whole, showing 451 percent growth.

Small Lists and Video/Screenshot features also more than doubled median weekly installs for their apps at 355 percent and 285 percent respectively.

As previously reported, games featured as the iOS App Store Game of the Day can see a leap of 802 per cent in downloads, while app of the day downloads had a boost of 685 per cent.

Additionally, Apple’s featured games weren’t limited to bigger name studios with 29 per cent of featured apps having fewer than 10,000 downloads before being featured.