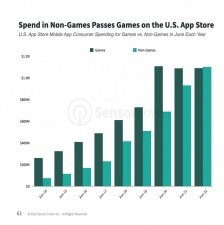 A new report by Sensor Tower has delved into the mobile industry and found that non-gaming apps are earning more money than games for the first time ever in Q2 2022. This comes despite downloads for both apps and games waning 2.5 per cent year-on-year.

TikTok remains the world’s most downloaded app – the eighth time it has held this position over the past 10 quarters, with only Zoom and Instagram otherwise taking the top spot in this period. However, Meta remains the top publisher, with five apps in the top 10 and three (Facebook, Instagram, and WhatsApp) in the top five.

When examining the Apple App Store and Google Play individually, there’s a noticeable difference in the top apps. TikTok and fellow ByteDance app CapCut hold the top two spots on the Apple market, with Instagram in fifth place, WhatsApp in sixth, and Facebook in eighth. However, Google Play has Facebook and Instagram in the top two spots, respectively, followed by TikTok and WhatsApp.

This suggests that despite being the smaller market, Apple tends to be the deciding factor in terms of charts. Although TikTok saw around half the downloads on the App Store than on Google Play, it was installed more than twice as much as the number two game on the market.

In total, 50.3 per cent of consumer spending on the US App Store came from non-gaming apps – an increase from 23.8 per cent five years ago, for a compound annual growth rate of 40 per cent, compared to 20 per cent for games.

However, consumer spending in the US market declined year-on-year for the first time since 2015. Part of this can be attributed to the normalisation of the market following the boom caused by the COVID-19 pandemic.