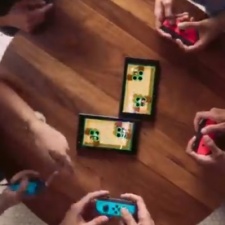 As well as offering a separate screen for players to look at, one tank battle mini-game showed that the screens could be used to create a larger map. In total Super Mario Party offers 80 new mini-games.

The Mario Party series has been around since the first entry was launched on the Nintendo 64 in 1998 - 20 years ago.

There have been 10 main entries to the series to date, the last one released on the Wii U.

Nintendo Direct E3 2018 Conference: Where to watch and what to expect