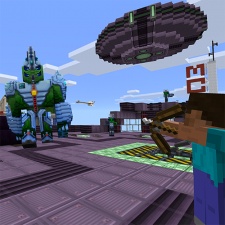 Nintendo and Microsoft took to Twitter last night to promote cross-play functionality between the two platforms, much at the expense of Sony.

PlayStation 4 owners are unable to play against users on rival consoles. This is an issue that recently resurfaced after it was discovered Sony would not even allow account access across consoles on battle royale smash hit Fortnite, following its launch on Nintendo Switch.

Seeing an opportunity for good PR and to beat down current console market leader Sony, Xbox UK kicked off proceedings with a trailer that promoted players’ ability to play Minecraft with Nintendo users.

The trailer championed the functionality with phrases such as “create together”, “explore together”, “survive together” and “better together”.

As part of a scathing PR stunt against Sony’s policy, Nintendo got involved and asked Microsoft if they wanted to play.

Minecraft’s account then got in on the act thereafter, suggesting they build a big ol’ love heart. Minecraft is owned by Microsoft.

Blockin’ out the haters

Sony has yet to say much on the controversy surrounding its policy, apart from issuing a vague statement following a drop in shares.

It outlined that there were plenty of players on PlayStation, PC and mobile, implying that Sony wouldn’t be swiftly changing its stance.

It did, however, manage to squeeze in that there are 80 million monthly active users on PlayStation Network.