"We're super excited about working on this very iconic IP" 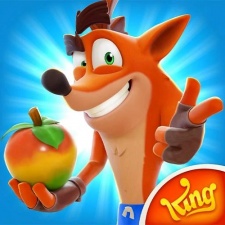 King President Humam Sakhnini has confirmed that Crash Bandicoot: On the Run will launch in March on mobile devices.

During Activision Blizzard's latest financial call, while answering a question on King's growth trajectory in 2021, Sakhnini noted that the team is "hard at work bringing Crash On the Run to our mobile audiences next month."

Previously, Crash Bandicoot's first original outing on mobile was only confirmed for sometime in Spring 2021, however, this new comment now seems to certify that the endless runner will release in March. This also goes together with a listing from the App Store, pointing to the game's release on March 25th.

"And we've chosen the runner genre, which is a very attractive category in mobile because it comes with the largest download volumes historically and has the potential for mass reach.

"So we'll bring this amazing mobile title to our Crash fan. But we equally are focused on broadening the franchise's audience in mobile. So when I put all those together I feel pretty good about the momentum in 2021 and beyond."

"We assume relatively little contribution from the release of Crash Bandicoot: On the Run as is customary for new mobile titles," said Activision Blizzard chief financial officer Dennis Durkin, when speaking about top-line growth at King.

Crash Mobile is set to feature 100 Hours plus of gameplay, 50 Bosses and 12 Lands, with pre-registration already available across the App Store and Google Play.

The Marsupial has found great success in recent times. Crash Bandicoot 4: It's About Time, for instance, went on to shift over 400,000 copies globally (via SuperData Research).

PocketGamer.biz has reached out to King for further comment.

We recently spoke to Sakhnini about the longevity of Candy Crush, pushing diversity in the industry and utilising Activision IP to bring Crash Bandicoot to mobile.

Prior to that, we wrote an opinion piece on why Crash Bandicoot: On the Run needs to not only look good, but feel good.