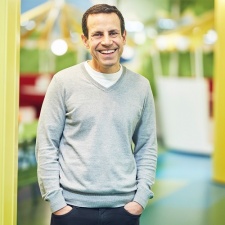 Everything has changed. If there's one thing that we can all agree on - after living through the torrid time that is 2020 - is that things will never be the same as they once were. There have been unprecedented shifts in the games industry with ripple effects that will undoubtedly be felt for decades to come. Every company far and wide has faced these challenges.

For one of the biggest players, King Digital Entertainment, it has also been a year of transition. In August, chairman and long-time CEO Riccardo Zacconi decided to call it quits and leave the company after 17 memorable years. In fact, it's also been the first year that the company has yet to launch a new game since it started making games (debuting with Bubble Witch Saga in 2011), heavily relying on its Candy Crush, Farm Heroes, and Pet Rescue series.

It's hard to not put this down to the ongoing pandemic, which has seen countless delays to timelines set out at the start of the year disrupted. There are naturally other factors to consider behind the scenes but even those at the top are well aware of the consequences of COVID.

"At King, all of our offices globally moved to work from home before national lockdowns began. Our teams have been our top priority throughout, and we had to make sure everyone had everything they needed at home, and make sure we could continue delivering fun to our players."

Of which, the public has reacted very strongly, with engagement and downloads both surging over the first half of 2020 - something that is expected to be sustained well into the New Year. Additionally, as a result, King has opened "nearly 100 roles" as it looks to attract top talent across its tech, level design and art teams.

A moment of escapism

Games offer so many benefits that have been underlined substantially throughout the pandemic. That sense of escapism and connectivity during these trying times is undoubtedly crucial, as mental health issues similarly have skyrocketed.

"Beyond the work at home challenges, this has also been a year of huge pressure on people’s mental and physical health, and we as business leaders have a responsibility to make sure our people are looked after, and we’ve taken steps to do that," says Sakhnini.

"These include home set up benefits, additional medical benefits, employee benefits, and more flexibility on work hours for parents."

A "highlight" for Sakhnini was earlier this year when King partnered with the World Health Organisation, alongside several other game firms to share public health guidelines via in-game messages as part of the Play Apart Together campaign. The initiative went on to reach a quarter of a billion monthly active users, quite an introductory year to become the face of the company.

After moving into the position of president in 2019, Sakhini "really enjoyed working closely" with Zacconni and described him as an "inspirational founder". With this, it now seems the new King frontman will be sticking to a tried and tested strategy that has reliably kept its revenue rising year-on-year.

Our net bookings grew over the quarter, and once again Candy Crush was the top-grossing franchise in the US app stores, growing in both monthly active users and bookings.

"The strategy at King has continued through that transition," Sakhinni says, when speaking on the first part of the company's plan going forward.

"We are committed to a high level of innovation in our live franchises: Candy Crush, Farm Heroes, Bubble Witch and Pet Rescue," he continues.

"They have huge fan bases and we are constantly working to provide new exciting content for them."

The biggest driver for the firm is undoubtedly the Candy Crush series, with Candy Crush Friends Saga, for one, recently exceeding $200 million in lifetime player spending, as well as the overall collection crossing the $2 billion revenue mark this time last year.

"On the revenue side, our net bookings grew over the quarter, and once again Candy Crush was the top-grossing franchise in the US app stores, growing in both monthly active users and bookings."

Alongside Call of Duty and World of Warcraft, the Candy Crush franchise exceeds a billion dollars annually. But what exactly is the reasoning that keeps the game consistently performing so strongly eight years on from release?

"I think Candy Crush is so popular is that it introduced games to a whole new audience - those who don’t necessarily identify themselves as ‘gamers’," Sakhinni explains.

"It’s the sort of game that people love to play on the train or the bus while on their commute to work, or maybe these days for five minutes between Zoom calls. What keeps it in this position is that we never stand still - there are constant innovation and improvement.

From this, King is looking to increase "social interactions" in-game to help sustain the success of the match-three puzzler. This had already begun with the first competitive Candy Crush Saga tournament taking place in the UK.

However, while this is all well and good from a financial side, microtransactions in free-to-play games are falling under more scrutiny - the UK government launched a call for evidence on whether or not video game loot boxes are a form of gambling in September, as the debate goes ahead. Now more than ever, balancing the line between making a game that is still fun and content-filled without nickel and diming the consumer needs to be taken into consideration.

The vast majority of our 249 million monthly active players have never spent any money in our games.

"It’s important to us that our games are all genuinely free-to-play and can be completed without making any payment at all," says Sakhnini.

"The vast majority of our 249 million monthly active players have never spent any money in our games," he adds.

"And the vast majority of players who have reached the very end of Candy Crush (and its 8,000 plus levels) have never spent any money. However, we’re still a business and for the portion of our players who want to take advantage of it, there are optional purchases available to enhance the gaming experience."

Microtransactions were immediately a concern upon the reveal of Crash Bandicoot: On the Run, the marsupial's first mobile outing and the newest game set to arrive from King in Spring 2021. It's also key to the second part of Sakhinn's strategy, to have a "focused pipeline" of new games in development as it strives to find its next big hit.

"Since King became part of the Activision Blizzard family, we’ve been looking at ways to work together to create even more great gaming experiences for our enormous player network," he tells us.

Adding that: "The idea for Crash Bandicoot: On The Run came when we were prototyping and thinking about how to transform the runner experience. We’d worked on some prototypes, and with Activision owning the Crash IP, the two felt like the perfect fit."

It also sounds like it won't be the last time King looks to utilise Activision Blizzard IP, as the president notes that there are multiple franchises that the team would love to see on mobile. But this all depends on the right "player experience" and whether or not it fits the "passions" of King's game creators.

Having the opportunity to become one of those game creators has become more of a pressing topic, as the call surrounding diversity in the games industry grows ever larger. It was a call that was echoed by Candy Crush producer Desirée Brathwaite. Taking part in our POC in Mobile series, she spoke of the "bias that black and brown people are less capable intellectually, and thus more suitable for roles that require less thinking."

We know the success of the business requires a big focus on diversity and inclusion.

In a period where diversity and race have been at the forefront of - not only across the games industry but all industries - the push for inclusivity is still one that needs to be tackled at the highest level. It's a subject that is often taken a blind eye to, and a horrible reality that many firms are not willing to admit. Sakhini applauds Braithwaite as a "fantastic leader" and her bravery in "sharing her experiences" and looks to be taking this into consideration.

"We know the success of the business requires a big focus on diversity and inclusion," he says.

King ran inclusive leadership training that use actors to portray real scenarios of unconscious bias and microaggression, as well as being vocal supporters of the gender imbalance in the industry and being one of the founders of the #RaiseTheGame campaign.

Alongside this, King partnered with Ada College: funding the school, providing mentors, helping with curriculum design, providing speakers and running a yearly game design competition for students. Based in Tottenham, London, Sakhinni says he is "looking forward" to the day where King can hire their first "Ada alumni".

Setting itself up for the future, we can only hope that both King and Sakhinni address the all too common issue today, instead of waiting for the next generation. However, it seems that under its new leadership, King will continue to crush it as one of mobile's giants long after the turbulence of 2020 has subsided.