The Candy Crush franchise has generated over $1 billion this year 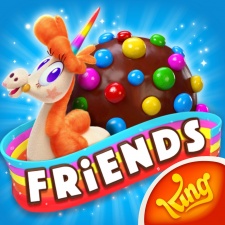 The Match-3 puzzler was released in October 2018 and is the fourth installment of the franchise. However, it is the third highest-grossing title in the series so far this year, having grossed $68 million, nearly double the $37 million generated by Candy Crush Jelly Saga.

Meanwhile, the game that started it all, Candy Crush Saga, continues to reign supreme as it has brought in over $720 million so far this year. All in all, the Candy Crush franchise has generated more than $1 billion this year alone.

Of the $213 million generated, the majority of Candy Crush Friends Saga's earnings come from the US, around 66 per cent to be exact, or rather $141 million. The UK and Japan come in at No.2 and No.3 respectively.

Meanwhile, Google Play accounts for 51 per cent of generated revenues, while the App Store makes up 49 per cent.

In terms of downloads, Friends Saga has generated 62 million. Yet again, the US comes out on top with nearly 12 million installs or around 19 per cent. India and Brazil close out the top three.

Again, Google Play has proven to be the more popular storefront, accumulating 75 per cent of downloads while the App Store brought in 25 per cent.

When looking at the Match-3 sub-genre as a whole, in the US, Candy Crush Saga is the clear winner in player spending so far this year. Meanwhile, in second and third are Candy Crush Soda Saga and Candy Crush Friends Saga respectively.

Of the top five Match-3 puzzlers, the only one not to be a King title is Clockmaker by Belka Games.

Furthermore, when looking at the puzzle genre as a whole, Candy Crush Saga remains king at No.1. However, Soda Saga comes in at No.5 while Friends Saga takes the No.15 spot.