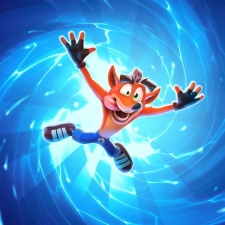 Crash Bandicoot: On the Run earned close to $700,000 within its first week of being live.

That's according to Sensor Tower's Q1 Data Digest report, which confirmed that the endless runner earned itself one of the best starts for a King developed title over the past five years.

In fact, only 2016's Candy Crush Jelly Saga beat out the marsupial for the top spot.

Since Crash Bandicoot: On the Run began rolling out in certain territories on March 23rd, downloads for the game have continued to grow to 37.5 million globally, as of April 14th, 2021.

Sensor Tower also confirmed that the first Crash mobile game in over a decade was the top new game in the US for downloads across Q1 2021.

Something quite impressive considering the game didn't officially launch until March 25th.

Players of Crash Bandicoot: On the Run have passed more than 76 million miles (noted as the equivalent to 160 trips to the Moon and back), according to King director of community and social marketing Roberto Kusabbi.

Other stats shared were that users had completed 140 million runs, with Crash dying 99 million times (most commonly by falling into a pit). Players have also collected 38.5 billion Wumpa Fruits and 776 million trophies.

Outside of this, King has not detailed any official figures and will likely not until the company releases its latest financial earnings.

It will be fascinating to see whether Crash mobile has the legs to keep players engaged long-term, after initially receiving more than 27 million global downloads in its first week of launch.

Ahead of the game's debut, we spoke to Crash Bandicoot: On the Run creative lead Stephen Jarrett who explained King's pursuit to create "the Crashiest Crash game ever".