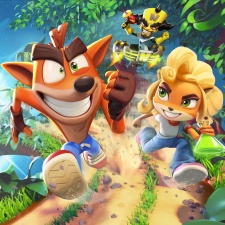 A mobile adaption of a popular character that initially debuted on console can typically arrive with a number of caveats. It's a port of an older game. The interface has not been configured precisely right for the mobile interface. It's just a 'cash grab'. These are several of the common criticisms that more often than not are rightly lobbied at companies for looking to take advantage of the lucrative market.

Swedish mobile giant King, however, looks to break this trend with Crash Bandicoot: On the Run, the first mobile game starring the marsupial designed from the ground up in over a decade. It's also of note because King doesn't release a lot of games, opting to focus on quality rather than quantity. Another rare trend.

Two years on from its last launch, and more than a decade since Crash's last outing on the platform, it's a big task at hand to deliver. For one, the IP has been riding high on a huge resurgence as of late, thanks to three successful outings over the last four years. The goodwill from fans is back too, but keeping that going with an audience ready to pounce at the slightest misstep is not something to be taken lightly.

Crash Bandicoot is one of the most beloved figures in gaming history and while a translation of the character to an endless runner felt inevitable, and in some ways overdue, a big question resides around the timing. Why now? Why not hot off the heels of the N.Sane Trilogy or anytime during the previous decade?

"It’s a rich universe with decades of material to draw on and his 25th anniversary this year!" Crash Bandicoot: On the Run creative lead Stephen Jarrett tells PocketGamer.biz.

"To have the opportunity to make your own mark on that universe with a new game is a career highlight for all involved," he continues.

"The team has done a great job of crafting a game that honours this franchise’s history in a way that will really excite the hardcore Crash fans, while also doing it in a way that will introduce Crash to a whole new generation of players all around the world."

A high bar set indeed, trying to appease both long-term and newcomers alike. Though history has shown that mobile adaptations don't always live up to expectations that fans are accustomed to on console, King is opposed to the thinking of "cramming the original game into a phone" - instead, building on what makes mobile work.

"Phones work differently to controllers and what makes you enjoy a game on your console isn’t what drives that same excitement on your phone," Jarrett says.

"If you stop and think about it, the original Crash Bandicoot games really helped inspire the modern mobile runner genre. It was a no-brainer that he would be an ideal match in this style of game."

We want the players to explore new worlds, fight fan favourite bosses and have clear goals in mind...

King goes through a rigorous testing phase before fully committing to a project. Even then it's quite a "big event" for the studio to go all-in. But from the day the team decided to take on Crash, it was "obvious" where the game was headed, with the runner gameplay implemented from the earliest phases of production.

It's actually impressive in some respects that Crash has yet to be given an endless runner. There's been plenty of spin-offs, from racing and party titles to joining the toys for life Skylanders universe. A runner is the "natural" next step for the character, according to Jarrett, highlighting how Crash's basic control scheme is something everyone will understand. The big difference King reiterates throughout the interview is that while Crash Bandicoot: On the Run is a runner, it's not an endless runner.

"We handcrafted our levels to provide our players with carefully designed gameplay challenges that have a start, beginning and end," Jarrett explains.

"This game isn’t a procedurally generated endurance contest. We want the players to explore new worlds, fight fan favourite bosses and have clear goals in mind beyond just how long they can avoid smacking into something."

With 25 years to pull from, there's a treasure trove of marsupial material to utilise. The goal set by the creative lead from the start was to create "the Crashiest Crash game ever", meaning the return of bosses that hadn't been seen in decades, easter eggs on every level and most importantly, pay tributing to what came before.

Originally developed in 1996 by Naughty Dog - best known now for the Uncharted and Last of Us franchises - Crash went through a tumultuous period, finally ending up with Activision, following the merge of Vivendi with the latter.

In the wake of seven years of silence, Crash returned to the spotlight with the N.Sane Trilogy (Vicarious Visions) in 2017, a remake of the original trilogy of games from the PlayStation era; a new entry in the racing series with Crash Team Racing Nitro-Fuled (Beenox); and a long-overdue original outing in Crash 4: It's About Time (Toys for Bob). All of which found varying levels of success.

"Beenox were very helpful," says Jarrett, when referring to the early characters and tone advised by the Canadian studio.

Good free-to play-games are games first - it doesn’t matter what monetisation your game has if it’s not fun.

"Toys for Bob have been a wonderful help to us throughout the process [too]," he adds.

"It’s not often you have two teams doing two different interpretations of a single universe inside the same company at the same time... and we worked together with them and the team at Activision to take advantage of that opportunity. We really loved what they did with Crash Bandicoot 4: It's About Time"

While the N.Sane Trilogy and Crash 4 opted out of any additional extra purchases via microtransactions, Activision did not show the same courtesy to Nitro-Fuled. After launching in June 2019, an update rolled out two months later adding in-game currency known as Wumpa coins to buy various skins. The move was heavily criticised. No doubt, this is where some of the concern stems from regarding the upcoming free-to-play mobile title.

"Good free-to play-games are games first - it doesn’t matter what monetisation your game has if it’s not fun," Jarrett says, when addressing concerns.

Adding that: "Our teams’ focus has been on making a game that is super engaging, will excite fans of the genre and the IP, and will keep people coming back because they’re engaged with the experience.

"If we make a fun game that’s really engaging, we know the rest will take care of itself."

Players can experience On the Run in full without spending any money, according to King. There will, however, be optional cosmetics (skins) that can be purchased as extras for Crash and Coco. Still, whether this stance is kept throughout the game's lifespan is yet to be seen.

For the time being, the studio is focused on the game's imminent release. Set to launch globally - outside of mainland China - in March 2021 (previously confirmed by PocketGamer.biz), King is confident in the quality of experience and the platform where it will debut. Naturally, the Nintendo Switch is a potential option in future - something that we've seen more and more as of late. While not ruling it out altogether, Jarrett believes that fans would "rather play the games on the platforms they were designed for".

Now all that is left is how the game will fare, and whether the rejuvenated success of Crash can long continue, or if the tired old trope of bringing a console to mobile has struck once again.

"We believe we’ve created a great new chapter in the history of Crash Bandicoot and are confident that when fans around the world finally get their hands on the finished product, they’ll see it the same way," Jarrett says.

"We want this game to extend Crash and Coco’s story forward and introduce those characters to a whole new audience. If we pull that off, we consider this to be a success."