Chipotle is the first restaurant brand to open in Roblox

This comes as part of Chipotle’s 21st Boorito celebration 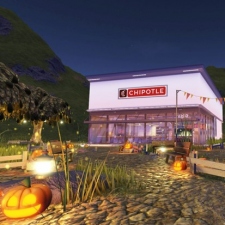 Chipotle Mexican Grill has today announced its 21st year of Boorito, a fan-favourite Halloween event, will be celebrated in Roblox. It is the first restaurant brand to open a virtual location there.

The event will go live tomorrow, on October 28 2021, and can be accessed at here. From then until Halloween, the first 30,000 Roblox users who visit in the virtual Chipotle restaurant in costume will receive a free burrito code for use on orders made via Chipotle.com or the Chipotle app.

The 30,000 refreshes daily, allowing a new batch of players to enjoy the offer.

We know our fans will be excited to celebrate the next evolution of Boorito in the metaverse.

Chipotle fans in the US who visit after the first 30,000 will be able to get a $5 burrito, bowl, salad or taco entrée from 5pm to close on Halloween with the digital-only code ‘BOORITO’ at checkout.

This is limited to one per transaction and customers can’t use the code in-restaurant.

"As a digital innovator, we are always experimenting on new platforms to meet our guests where they are," says Chris Brandt, Chief Marketing Officer at Chipotle. "Roblox's popularity has boomed over the past year, and we know our fans will be excited to celebrate the next evolution of Boorito in the metaverse."

Chipotle's share of the proceeds from sales of in-game items is to be donated to a cause supporting young farmers.

This event can be accessed here.