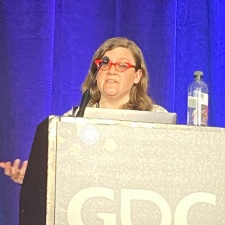 Game narrative is best presented when all elements of game dev is aligned, pairing art and marketing with tech and UX design. Rindo starts by quoting Mary Catherine Bateson, ‘the human species thinks in metaphors and learns through stories’, and identified three key pillars to player behaviour: context, action, and emotion.

The player context is a foundation for player motivation: conceits, behaviours, and world building, and it is motivated by emotions and actions. This is frequently informed by metaphors, and carefully balancing cognitive metaphors help player intuit the game rules and commit energy to engaging with the game that would otherwise be wasted deciphering the worldbuilding.

This is the approach the Candy Crush Saga team took when creating the conceit of the Candy Crush worldbuilding, and the context combining King’s fantasy world and fantasy tropes recognisable by the majority of players supports player engagement and relatability.

King initially queried players whether they wanted story in games, which led to disorganised feedback from players which didn’t specifically realise the user experience had already informed the storytelling.

Instead, King queried players for feedback on the story already experience. Rindo remarked that the feedback was far more positive, with players able to align deep storytelling moments with the gameplay. But there was also conflicting feedback on memorability and clarity, and tying this into player actions.

One approach is to acknowledge affordances and signifiers – which create mental models derived from human perception. Candy Crush’s initial tutorial created bizarre questions: why is the player engaging with the in-game actions, and who are the characters in the initial cutscenes?

Live-ops content was identified as an ideal opportunity to reiterate Candy Crush’s core conceit and introducing players to in-game characters, as well as creating opportunities for further data gathering through AB testing and player surveying.

Rindo stated: “I admit player retention of story is not as high as I would like”, but remarked this is increasing as it has become possible to map the player’s emotional journey and the connectivity with in-game action. This is a recursive loop: the more narrative themes align with the players, the more they engage with the game, which leads them to further connect with the worldbuilding and characters, thus leading to more narrative engagement.

As a result, most recent player feedback indicates that the most active Candy Crush players are now “overwhelmingly positive”, and that characters were increasingly popular, dispelling previous assumptions about the game: two-thirds of surveyed players find narrative events more engaging, and 70 per cent of active and lapsed players indicating a desire for a Candy Crush backstory.