Designers from King, Double Loop, and others meet this year’s GDC F2P challenge: designing for minnow, rather than whales 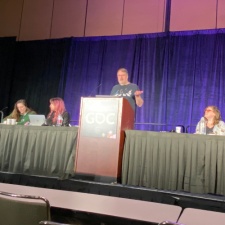 Steve Meretzky, independent game design consultant, asked: “What if we designed a game that gets the lion’s share from players who never spend more than $10.” This is how he opened hosting a panel of four F2P designers to explore this year’s GDC F2P challenge.

The challenge seeks to pivot from prevailing design patterns that are attuned to ‘whales’ – ardently wealthy and engaged players that spent significant amounts of money – instead designing a game that will make most of its revenue from ‘minnows’, the players whose lifetime spend is $10 or less.

Moledina and Schuckman, in lieu of embroidered jackets, opted to “design the best game ever”. In large part because Double Loop predominantly designs games for wider audiences, specifically audiences that may not self-describe as gamers, and want players to be invested in the game, rather than feel obligated to be invested, and are able to make smaller ‘a la carte’ payments.

Presenting Animal Kingdom Mystic Rescue, it is a cooperative experience built on feel-good, rewarding experiences in which players become personally invested in the animals, and where in-app purchases can contribute to charitable causes. “Think Boyfriend Dungeon, but you’re not dating the horses”. They emphasised a low-friction trading system between players, using magical fruits and footstuffs that imbue animals with properties that make them suitable for in-game competitive events.

This low-friction, high social-interaction is predicated on mutually beneficial play that will encourage minnows to periodically invest smaller amounts for gradual boosts. “We want this to be a long-term hobby, rather than buying something immediately expensive and impactful on the experience.” The IAPs will also have stackability: multiple benefits built on every offer, to better suit players to engage in smaller but more frequent IAPs.

Double Loops' entry was voted the winner by the audience, and while PocketGamer.biz certainly appreciated Mesmar's... punchiness when it came to critiquing capitalistic structures and unsustainable wealth, Moledina and Schuckman inarguably presented the most complete vision for designing for minnows.

Rindo broke the IAP core values down to sharing goals across the player base, and ensure it was respectful “to create an experience that fostered pro-social behaviour”. As such, she explored social relationships across a broader audience, rather than soloed, select groupings, through play actions. With this in mind, 52-card decks were an ideal focal point to design as they have a ubiquity that is widely recognised. These would be accented with bespoke imagery, with a trading mechanic.

Deciding on a mission statement, ‘a prosocial game for frugal people that want more meaningful relationships in games’ and pairing it with monetisation, Rindo felt enabling low-IAP gifts to alter the appearance of cards that would create unique combinations for enhanced social interactions.

Through a remote appearance, Mesmar recognised the drop in players for most F2P games, regardless of financial commitment (with an enjoyably sly dig at economic theory and the detrimental impact of capitalism…). Players need to participate in both the game and the economy, but typically need to be externally economically successful to get the most of the game’s experience.

Mesmar looked at different economic models, such as universal basic income, and how this may tailor the player’s relationship with the title. This may allow players to be happier in the game, as well as eventually saving up for more expensive in-game items. But looking at more draconian economic systems, where the central economy is firmly dedicated by the game maker – “perhaps one which prevents players from further buying IAPs, if they buy too much” – was deemed not in the spirit of the challenge.

Mesmar landed on a clan-based system, whereby tools and resources and financial investment belong to a central authority that connects players, but ultimately felt exploring post-capitalist economic systems may provide the answers…