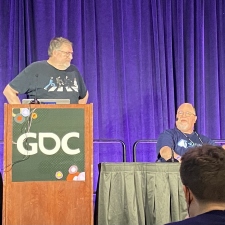 Meretzky opened with remarks on how the post-IDFA landscape and mass of large-scale acquisitions has been joined with the slowing of changing trends, which is typical of a maturing industry, but the pair decided to focus on different trends.

The proliferation of merge games was correctly predicted by Rohrl in 2020, and the genre/mechanic has since become one of the most popular elements of mobile games: it is incredible easy to learn, applicable with diverse themes, and can be aligned to player urges, both to create and destroy.

Typically, the segmentation of core and meta game loops – whether they take place on the same playing field or separately – is dictated by genres, but the merge mechanic/genre allows for core and meta games to exist on both one- and split worlds. However, there is a definitive pattern of profitability for merge games: one-world is far more profitable than split worlds, with Merge Dragons remaining the most profitable merge game. But Meretzky ends with something of a staple truism: “The most important lesson is innovate, don’t renovate.”

Moving away from merge, Rohrl started with discussing the ways in which Supercell has brought genres to mobile, with Clash Mini, its most recent game after several years without releasing a new title, its take on autochess, a genre which has found popularity among audiences and streaming but not found its breakaway financial success.

However, Rohrl details how Supercell’s mobile expertise has subtly changed its approach, including requiring players to design their team from a personal collection ahead of battles, paired with a finely tuned quest system. This is combined with a smaller playfield and streamlined battle system – 15 seconds of setup, 30 seconds of battle – compared to most PC-based autochess games with bouts that last several minutes.

However, Clash Mini’s early release struggled with retaining players and monetisation rates. But it needs to improve to be a sustainable mid-core flagship title. Despite successfully making the genre approachable, the challenges with monetisation across the genre persists: “It’s too early to tell if Supercell will turn this into a global billion-dollar enterprise. But if anyone can, it’s Supercell.”

Meretzky correctly predicted in a previous F2P GDC roundup how mobile games advertising will become increasing misleading and manipulative, expressing concern over the most recent trend of misleading mechanics and narrative for games such as Merge Mansion. However, most concerningly, there is an increase in mobile games ads that directly mislead players – claims of increasing IQ or preventing Alzheimer’s.

Is there a way forward? Meretzky is sceptical, and stated: “The real power to fight this lies with the Googles and Apples and Facebooks of the world. And there is little inclination to do so.” He showed a slide with lessons learnt over the last couple of years. It had one bulletpoint: none.

Rohrl concludes with a discussion of Apex Legends Mobile, which has experienced a strong soft launch, but has not been released for long enough to produce definitive data. But it is indicative of how triple-A titles and franchises are reaching the mobile audience, which is typically thought to be represented by casual games such as Candy Crush and Game of War.

"Why spend the huge amounts of money or effort to bring Apex Legends to mobile, and not the other way round?" This is exacerbated by looking at the US top grossing games of February 2022, where only four of the top 24 are tied to large franchises.

However, when looking in China, Brazil, and India, there is a different pattern: occupying four-five of the top 10 grossing mobile games. Rohrl speculates this is due to the lack of PC and console market penetration in regions outside of the developed world and a younger player base that is accustomed to gaming on mobile phones.

GDC: moving away from disruptive ads