GDC: moving away from disruptive ads 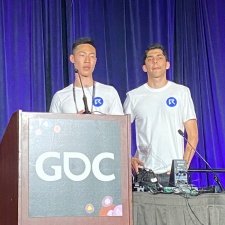 In Relentlo’s sponsored session, F*** disruptive ads: How to monetize without losing your audience, co-founders Neil Tewari and James Jiao noted that “the goal of making ads non-disruptive has been consistent, but the method has drastically changed”, from the original outrage surrounding Elder Scrolls Oblivion’s horse armour and the proliferation of season passes to the more notorious lootboxes and its insidious gambling impulses.

Nowadays, cosmetic items are commonplace and widely accepted, and battle passes are among the most successful means of monetisation while also increasing player engagement. In mobile gaming, banner ads and video ads are commonplace. Jiao was explicit: “We hate them.”

The pair discussed how product placement can seamlessly integrate ads, with the example of billboards in real-world settings, with Jiao demonstrating with a KitKat ad on the stage of Angrydevs’ Vita Fighters title.

They outlined some drawbacks – no player interactivity, and it did not necessarily distinguish the unique qualities of advertising in gaming than Google Ads. This resulted in lower response from large brands than anticipated.

Relentlo decided to pursue content creators attached to large games such as Minecraft and Roblox, where there are dedicated player-created maps and environments that may support in-game advertising – with two existing examples of KitKat product placement in a Fortnite map and within Grand Theft Minecraft.