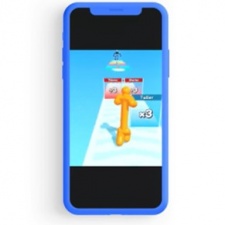 The third installment of this hypercasual event was confirmed in February this year, promising at the time a $2 million prize available for any game published by July 7, provided it also reached eight million downloads on iOS in the US.

Aiming for the top

Tall Man Run, a game published by VectorUp, has won the first prize. It is the fourth game VectorUp founder Carlton Forrester has published with ironSource Supersonic and reached 40 million downloads worldwide across iOS and Android.

According to data.ai, the game also spent two weeks at the top of Android’s chart for all apps in the US in May.

In second place, Pau Rau’s Move Animals spent roughly one week as the number two game on iOS. The founder of Pau Rau, Paul Raubic, has published one game with ironSource before – titled Move People.

With this year’s Supersonic Superstars contest having concluded, ironSource has now kicked off its Supersonic SuperSummer. Running from July 14 to August 15, users are being financially incentivised to test games.

A baseline reward is being given for testing games regardless of the results, but there are certain benchmarks boosting a user’s rewards such as a $3,000 prize for prototypes reaching a CPI of $0.50 or lower with day one retention above 25 per cent.

Last week, Unity and ironSource announced a merger to form an end-to-end platform, although Unity CEO John Riccitiello received considerable criticism due to his colourful language when describing some developers who shun monetisation as "fucking idiots".