The leading games industry conference is returning to London this January – start planning out your days around the conference with this helpful guide to London attractions! 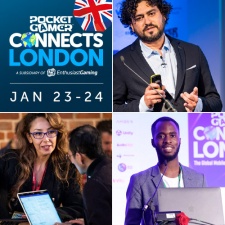 January is closer than you think, and hundreds of games professionals from all over the globe have already secured their seat at our London conference this January. Now’s the time to start planning ahead and make sure that you’re ready to make the most out of your time in London!

We’re starting off 2023 strong with our flagship London show. Pocket Gamer Connects is returning to London on January 23rd to 24th to welcome over 2,000 attendees from all around the globe for two days dedicated to networking, discovering, pitching and learning from over 200 of the world’s leading authorities in gaming. Our London conference is our most popular and highly attended event by far – you won’t want to miss starting off your year making life-changing connections and exploring what’s next for the games industry.

There is no better time to book your ticket to our show than now! Secure your seat ahead of time and save up to £350 with our Early Bird offer over on our website today. It’s only available for a limited time, so take advantage of it while you still can!

Today, we’re diving into a little bit about the capital city and what you can do during your time there this January. Read on to find out more about what the marvellous city of London has to offer!

Learn a little more about London and its people
Let’s get the basics out of the way. London is one of the most popular and populated cities worldwide, and this cosmopolitan city is home to some of the most unmissable, iconic landmarks in the world as well as an immensely diverse population, world-class dining and entertainment and incredibly rich history. Needless to say, coming to London can be a bit intimidating. It’s the largest city not only in the United Kingdom, but in all of Europe.

London is home to over 9 million people, and it’s a popular destination for international migrants. Over the past decade, the yearly migration to London has averaged 95 thousand people per year. People from all over the globe flock to this city, and just how rich the city is in its diversity showcases this. Whereas White British-identifying individuals make up 78.4% of the population in England and Wales overall, the White British population accounts for only 43.4% of London’s overall population. This makes London a considerably more ethnically diverse city than the rest of the UK, with 40% of Londoners identifying as Black and Minority ethnic compared to England’s figure of 10%. Further, 37% of Londoners were not born in the UK – the wealth of diversity both ethnically and internationally can be felt throughout the city, with over 300 languages spoken there everyday – this is more than any other city in the world.

Coming to London, you will feel both its rich history and diversity. There is no place quite like this city in the UK when it comes to being a melting pot of varied backgrounds, languages and people.

Explore the City of London

Option paralysis making it difficult to decide exactly where you want to start your London adventures? We know just how thrilling coming to the capital can be, so we have compiled just a few of the amazing destinations you won’t want to miss while visiting London this January. These suggestions have something for everyone, whether you’re looking for some of the top must-see attractions in London or for some unmissable London gems that you might not already be familiar with. We strongly recommend that you book a few days around the conference to save some time to fully take advantage of what London has to offer.

Take a dip into London life:

Want even more ideas for the best attractions, activities and sights you won’t want to miss in London? The articles below have everything you need to know so you can scope out everything waiting for you in London far ahead of time:

Book your ticket to London!
You won’t want to miss out on everything we have lined up for you at PG Connects London, and you won’t want to miss getting to explore the incredible city and make the most of your time there. You can also make the most of your overall conference experience by booking your ticket today and getting everything set so that you can kick 2023 off in the strongest position possible for your business and yourself. Secure your seat to join us in London in January today while you can still save up to a whopping £350 on your ticket to our biggest, most popular show!

Level up your game-making skills and tools at Pocket Gamer Connects London next week!

Our biggest event to date is coming up this month – now’s your time to get involved!