The entire World of Tanks lineup are seeing the introduction of new cosmetics, items and quests themed around the team of Mila Jovovich and Arnold Schwarzenegger 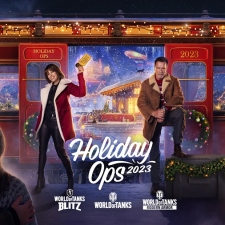 World of Tanks is no stranger to special events, as one of a surprisingly short list of free-to-play tank simulation games, Halloween, Summer and now Holiday events are all par for the course. However, this year World of Tanks developers Wargaming are hosting a special holiday event featuring two major stars, Mila Jovovich and Arnold Schwarzenegger. The “Holiday Ops 2023” event covers all three major titles on every platform, including mobile title World of Tanks Blitz.

World of Tanks franchise director, Christopher Chung, commented on the collaboration “Like many of our millions of players around the world, I have watched movies starring Arnie and Milla separately, over the decades. It’s truly a dream come true to partner with both global stars in our first-ever franchise-wide holiday celebration. There will be something special for our players on whichever platform they enjoy World of Tanks.”

Ever since the earliest days of Hollywood, the movie industry has sought to elevate it’s actors from just screen presences to bonafide cultural icons. Both Jovovich and Schwarzenegger have starred in major movie franchises over the years, and their endorsement in-game is sure to bring in some players just out of curiosity. It certainly proves that star power is still a major factor for companies, and the decision to pursue it with two actors of this pedigree indicates Wargaming thinks it’ll be a worthwhile investment.

The appeal of seasonal events was something we touched on with World of Tanks Blitz’ Halloween event, and what we wrote there about how timed events and exclusive cosmetics encourage players to log in a lot more than XP bonuses they can get during any other limited event is true as well now. Making each Holiday event unique with cosmetics, missions and more helps to encourage players to come back each year to see what’s new.

It’s certainly been a turbulent year for the whole mobile gaming and wider gaming industry, and especially for Wargaming. Earlier this year they officially pulled out Belarus and Russia, the former where they were founded. But bounced back with the announcement of new studios opening in Poland and Serbia in June. Clearly, whatever the issues, Wargaming is keeping business as usual for players.