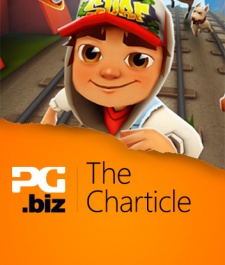 Back in March 2013 we took a look at how Kiloo's Subway Surfers was blending impressive downloads figures with equally impressive engagement and retention rates.

Now, almost 12 months on, we're checking in on the game again to find out just how relevant the endless runner is on iOS, and Google Play devices nearly two years after its May 2012 launch.

It's been a good 12 months for Subway Surfers on the US top grossing chart for Google Play, with game ticking over nicely inside of the top 50, and peaking at #10 in February 2013.

What's more impressive however, is the fact that Subway Surfers has only fallen outside of that top 50 three times in the past year.

Not a bad showing for a game that's been out for the best part of two years, and something which demonstrates the importance of updates.

Subway Surfers has been updated 18 times since launch.

On the US top grossing chart for iPhone, the game hasn't been doing quite as well.

The game peaked at #9 in April 2013, but since then it's struggled for stability, constantly moving up and down the charts, even dropping out of the top 100 a number of times.

Turning our attention to the grossing charts for the EU 5 - the UK, France, Germany, Italy, and Spain - a quick glance at the charts makes it clear that Subway Surfers is finding more success in the Google Play store than in the App Store.

In the European top grossing charts for Google Play, Subway Surfers has been a constant presence in the top 50 for the past year.

The game has been doing particularly well in Spain, where it sits quite comfortably inside the top 20, occasionally breaking into the top 10.

Mirroring the US iPhone chart, the game's showing in the European top grossing chart for iPhone isn't a pretty sight, and its performance has been messy to say the least.

As you can see from the chart below, the game's performance over the past year has been getting increasingly unstable, and the game has found it impossible to nail down a good position for any length of time.

In Asia - notably Japan, China, and South Korea - the game's presence in the grossing charts is practically non-existent, though.

In February 2013, Subway Surfers peaked at #38 in the South Korean top grossing chart for Google Play, since then the game has only managed to lose ground, and it has now failed to feature in the top 100 since October 2012.

In China and Japan, the game couldn't even gain enough momentum to climb into the top 200, and a peak position of #210 in Japan highlights just how difficult it is to make an impact in the east.

Over on the Asian grossing charts for iPhone, the game's situation hasn't improved.

Once again, the game has been best received - and that's a term used loosely - in South Korea, where it peaked at #46 in April 2013, though it has since struggled to carve out a permanent position within the top 200.

In China, Subway Surfers has only managed to creep into the top 200 on a handful of occasions, while in Japan the game hasn't even made a dent in the top 500.