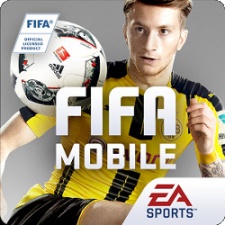 This time, we're taking a look at FIFA Mobile, EA Mobile's latest (and most concerted) effort to bring the phenomenally successful football franchise to mobile.

FIFA's relationship with the mobile platform has changed somewhat over the years.

Up until FIFA 13, the mobile version followed the established (if uninspiring) formula of aping its console-based big brother every year, each time becoming more feature-complete but inevitably falling way short.

FIFA's relationship with the mobile platform has changed somewhat over the years.

It largely continued this trend for the 2014 edition, but with the notable addition of Ultimate Team - the wildly popular card-based squad building mode introduced in FIFA 13 on console.

This is our year

After a couple of years of Ultimate Team bedding in on console, and proof that even those who had already spent $60 on a boxed product were willing to spend more on IAPs, it was front and centre for mobile's FIFA 15 Ultimate Team.

In fact, that series entry effectively dropped anything that wasn't Ultimate Team. As did mobile's FIFA 16 the following year.

Finally, FIFA on mobile had reached something resembling its own identity - not to mention having a monetisation system that supported multiple levels of genuinely enticing purchase over long periods.

Finally, FIFA on mobile has reached something resembling its own identity.

It still didn't feel ready to compete as a top-tier F2P mobile game, though.

Why were we still playing full matches, in much the same way as we would on console? And in the age of games-as-a-service, is there really any need for a new app every year?

FIFA Mobile addresses these issues head-on, finally distancing itself from the console version by looking and feeling like a modern mobile game.

CSR Racing is mobile's premier racing game series not by cramming Gran Turismo onto a touchscreen, but by placing the emphasis on metagame and simple, short bursts of gameplay.

FIFA Mobile takes the same approach. The new Attack Mode is the most welcome change, swapping full online match-ups for asynchronous play against other players' teams.

A full match consists of four turns (each player gets one per half), cutting out all the uneventful periods and only giving control when the player has a goalscoring opportunity - rather like the excellent New Star Soccer.

Even better, if you don't engage the on-screen controls, the attacks will play out by themselves.

Perhaps this offers a glimpse of the franchise's future.

Football with autoplay might stick in the craw for purists, but it does feel like an addition befitting a free-to-play mobile game in 2016.

And post-Ultimate Team, isn't it collecting players that really matters? It's the card packs that have got kids screaming on YouTube, not the actual gameplay. Perhaps this offers a glimpse of the franchise's future.

But while many other developers have made great mobile games that are only let down by their lack of effective free-to-play monetisation, FIFA's issue has been the opposite.

Indeed, Ultimate Team is a proven model that has barely changed since its inception, and nor does it need to.

Points are spent in the Store, where you'll get your EA-curated player packs and bundles - often at the premium end of the spectrum.

The cheapest here is the Beginner Pack, offering two bronze players and one silver or better player for 3,500 Coins - an amount accumulated relatively quickly through standard play.

But for the classier players, you'll need to shell out more. A mid-range Pro Pack, which guarantees at least one gold player, costs 7,500 Coins or 150 Points - worth approximately $1.50.

The Market is the option for those who don't want to shell out on IAPs.

Other, more premium offers appear to be timed and ever-changing, giving them a sense of exclusivity and encouraging urgency on the player's part.

The Market is the option for those who don't want to shell out on IAPs, allowing players to wheel and deal by selling their own unwanted cards to one another.

On console this has become a bustling economy, and I see no reason why it cannot be the same on mobile - especially if FIFA Mobile is to be the platform for ongoing updates down the line, rather than just another yearly iteration.

But as on console, this is all done with FIFA Coins - a currency you cannot buy, but have to play to earn.

It's a welcome separation between the soft currency Market and the hard currency Store, making FIFA Mobile quite playable without spending a penny.

Of course, it'll take longer to rise through the ranks if you're scraping a team together through the marketplace rather than taking the shortcut of card packs.

Until now, FIFA on mobile has never made sense.

And there is also a new energy system that costs 99 Points to refill, making it more difficult to earn Coins - although it's not too restrictive in practice.

At the end of the day

Until now, FIFA on mobile has never made sense. The controls were terrible, it didn't look as good as on console and it lacked a robust set of features. Why would anyone play it?

FIFA Mobile, however, does make sense.

It's sufficiently different to the console version, suits on-the-go gameplay and finally utilises the Ultimate Team model successfully on its spiritual home platform.

There's little to remark upon about the monetisation in this particular version, given how ingrained the model now is, but it is remarkable how at home it feels on mobile.

Breaking my Ultimate Team virginity by spending money ($4.99 for 500 Points) on a couple of packs was enough for me to immediately understand why it's now the dominant mode in EA's football sim.

FIFA Mobile is not just the first entry that shows any signs of truly understanding the platform, but it's also the blueprint for what I believe will be FIFA's free-to-play future. We should study it carefully.

How does The Sims Mobile monetise?