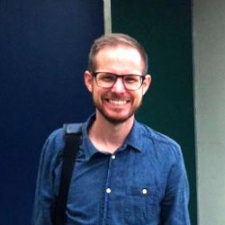 Bo Nørgaard is a Danish journalist who has recently joined the Nordic Game Bits team.

A couple of weeks ago Apple released its Apple Watch.

Although the screen is small, the new platform is the most accessible yet, according to Everywear Games CEO, Aki Järvilehto.

The Finnish game developer's title Runeblade is developed exclusively for the Apple Watch.

"Smartwatches are such a different platform, so we felt they deserved games that were tailored for them," he says about the idea behind Everywear Games' debut.

Runeblade is a classic roleplaying game in many ways, with a fantasy setting featuring spells, enchanted blades and magic.

But where the more traditional roleplaying games for consoles and PCs focus on long sessions, where you play for hours at home, Runeblade's approach to the genre is something different.

"We wanted to create a world with all the classic elements of high fantasy, while tailoring it specifically for smartwatch gameplay," Järvilehto says.

A change in mindset

Though Runeblade is Everywear Games' first effort into game development as a company, the team behind it is far from newbies when it comes to making games.

Järvilehto's last employment was as executive vice president of Remedy Entertainment and as board member for Finnish game development associations Neogames and IGDA Finland.

His two co-founders, Markus Tuppurainen and Mika Tammenkoski, have years of experience from companies such as Angry Birds developer Rovio and Remedy. The rest of the team is equally experienced, which has been important for the developing process of Runeblade.

"Everyone on the team has a decade or more industry experience working on many different platforms. So we know our way around new technologies," Järvilehto explains.

Sessions have been designed to last 5-15 seconds.

"But even more important is the change in mindset. Consoles and smartwatches are very different in terms of game design.

"We've done these transitions before and know how important it is to recognize that people's expectations are very different for each platform. It's critical to understand how people will actually use these devices."

While many game studios focus on developing for multiple formats simultaneously, Everywear Games takes another route.

With a slogan that reads "The world's first wearable games studio," the Finnish game developer is focusing on games for smartwatches exclusively.

With the emergence of the mobile games for phones and tablets, developers started talking about "The Starbucks Factor".

This meant a lot of games started focusing on gaming sessions that last a couple of minutes, so you could play while waiting for a cup of coffee - hence the Starbucks reference.

With Runeblade, Everywear Games have shortened the period even more, now focusing on "The Traffic Light Factor".

"We've dramatically simplified the core gameplay almost to single click ease. Sessions have been designed to last 5-15 seconds and everything is tailored for Apple Watch," Järvilehto says.

We think that Apple Watch is the gaming platform of 2015.

"All the way during development we've had this unique feeling that's perhaps a little hard to describe - the kind of feeling that we're doing pioneering work; something that no-one has done before in games."

With the Apple Watch - and the smartwatches as a whole - still in its youth, we have yet to see the full potential of watch gaming.

But Aki Järvilehto and his associates are optimistic about the future.

"Last fall when Apple announced WatchKit we were very impressed. Apple Watch is perhaps the most advanced smartwatch ever created, and with WatchKit we knew we could deliver new and fresh gaming experiences," he states.

"We think that Apple Watch is the gaming platform of 2015. A brand new Apple platform with no-existing content - what could possibly make it more exciting for developers?"