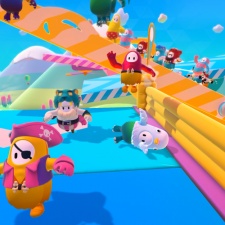 It's fair to say that PC and console game Fall Guys has become the surprise hit of 2020. With seven million units sold on Steam and the title of "most downloaded PS Plus game ever", it's taken the world by storm and doesn't appear to be losing momentum any time soon.

There are, of course, many factors to its success. Some will point to its virality on Twitch, thanks to a smart beta key drop campaign which saw streamers and influencers scrambling to get access so they could be in on the hot new game only select people could play.

Others will rightly give praise to the game's social media campaign, which is on the verge of raising over $400,000 for UK gaming charity SpecialEffect and has garnered attention from influencers, rockstars, and major food chains alike.

Having the weight of Devolver Digital behind it no doubt helped, and its PS Plus launch was a stroke of genius for getting this slightly bizarre take on the battle royale into as many hands as possible.

But all this wouldn't have been possible if the game wasn't good. All the social media campaigns in the world can't help a duff product become a global sensation, and at the heart of this matter is a simple fact: Fall Guys is a brilliant game.

It's brilliant, in short, because it's a mobile game.

Now, obviously it isn't a mobile game - not until Bilibili pushes it out to smaller screens in China in the coming months. But I would argue that Mediatonic's expertise in mobile has helped steer Fall Guys' development in such a way that its lessons learned in retention and monetisation have paid off with the explosion of interest in its console title.

Mediatonic is swiftly heading for its 15th anniversary, and anyone with a good memory will know that the developer has dabbled in many different platforms, including web games, console, and yes, mobile.

Even in recent years, as it's spread out into its experimental console titles like Hatoful Boyfriend and Murder by Numbers, the developer has kept up with its mobile releases, and is currently operating Scopely's Yahtzee with Buddies and Microsoft's Gears Pop.

Both of these are free-to-play, short-session games with familiar mechanics, but a strong sense of style and a heavy focus on retention - largely through offering tons of content for players to engage with at a time.

And some of these elements are clearly seen in Fall Guys. It's a game designed for ease of play, quick sessions, and keeping you coming back for more and more and more.

There's an obvious caveat here - Mediatonic is now a huge organisation, and it's unclear how much of its mobile team transitioned over to work on its console title. Though it's also worth noting that the studio includes literally every employee in the Fall Guys credits, so there'll almost certainly be some overlap, at least in sharing lessons on design and development.

And one could easily point at a range of other battle royales on console - Fortnite especially - which will have no doubt provided inspiration for much of the game's UI and mechanics.

But there's a wider point to be made about how these games have picked up from mobile's free-to-play ventures in the past, and having that background of knowledge is sure to aid any developer in creating the next hit thing.

Mediatonic's mobile background sometimes goes unmentioned, but it's clearly helped the studio learn and understand how to appeal to a mass market, and keep a huge audience of players interested and coming back to play more.

And it's easy to see that this deep understanding of mobile play and free-to-play practice, whether intentional or not, helped shape Fall Guys into the game it is. Its success in the hands of Bilibili is practically guaranteed - it's already basically a mobile game, after all.