As the global games market grows, what are the trends that are shaping the future? AudioMob peers into the crystal ball and highlights the opportunities for developers 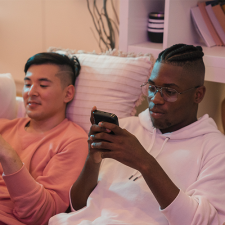 2022 truly has been mobile gaming’s biggest year. Gaming activity across the globe doubled during the pandemic - but as the world finally eased out of Covid restrictions, the power of mobile gaming showed no signs of slowing down. With three billion active users to date, the mobile gaming industry is now projected to represent 50 percent of all revenues in the entire gaming market. It will be worth $470 billion by 2030.

With these predictions, it’s not surprising that some of the biggest players in gaming, media and entertainment - including TikTok, Netflix and Nintendo - have brought mobile games into their product offerings. But what value do these brands see in the mobile gaming market and what more can this trend tell us about consumer behaviour in a post-pandemic climate? Also, what information can we extrapolate from these trends to make predictions about the effectiveness of programmatic audio ads within the growing mobile gaming market?

Believed by many to now be the number-one platform for discovering new trends, TikTok’s role as an aggregator for new products and headlines has taken on gargantuan heights. This summer, the popular social media platform announced the launch of mini-mobile games that can either be played within its social video app or found through creators’ videos. After first running tests with mobile gaming giant Zynga last year, TikTok announced partnerships with a range of mobile gaming developers earlier this year — including Voodoo, Nitro Games and FRVR.

The social media platform also recently introduced its first global gaming event, ‘TikTok Made Me Play It’. Bringing together some of the platform’s most popular gaming creators and major brands, this event is underlining the scale and influence of gaming on the platform.

TikTok’s official statement reads as follows: “The future of gaming is here — and it’s happening on TikTok. Leading publishers are launching games on our platform as culturally relevant properties, building communities and inspiring broader entertainment audiences to discover and play their games. Now, your mission is simple: discover why TikTok is the gaming industry’s #1 gateway to growth.”

What makes the push into gaming a right fit for TikTok? For starters, the hypercasual nature of both mobile gaming and general in-app scrolling makes the platform an ideal ground for launching playable, lightweight games of short session lengths. Gaming also represents an excellent growth opportunity for the social media giant — as well as a way to keep user engagement high, all while staying in line with the explosion of the global mobile games industry.

Netflix, known killer of the Blockbuster star, now doesn’t just offer a premium list of films with its subscription. For the last year, the streaming service has also been quietly adding a growing list of mobile games to its roster - all of which are now available through the Netflix app, which is available on both iOS and Android devices.

In the summer of 2022, Netflix declared its plans to double its games list - citing mobile games as a key aspect of its future strategy (including games that accompany its popular flagship series, such as Stranger Things: Puzzle Takes). At the time of writing, there are now 30 mobile games available for users to play on mobile devices with a Netflix subscription.

To date, 1.7 million users now play Netflix games daily. That’s less than one percent of the platform’s subscriber base, but current upward trends in the mobile gaming sector still suggest that these numbers are likely to grow within the coming years. Historically, Netflix also hasn’t shied away from offering more interactive entertainment options to subscribers — other examples include Bandersnatch (Black Mirror’s acclaimed ‘choose-your-own-adventure’ edition) and a retro game of Stranger Things Season Three. As experiential marketing and immersive experiences continue to see a similar trend upward, Netflix’s venture into the mobile gaming sphere also falls in line.

From console to mobile: an ongoing journey

The biggest names in the gaming industry - namely Nintendo and Microsoft - have recently pronounced moves to plunge full force into the mobile gaming sector.

According to a statement from Nintendo, the new venture company is being formed “to create value-added services [that will] further reinforce Nintendo’s relationship with customers.”

Microsoft also recently announced its plans to build its own Xbox mobile gaming store in an attempt to rival Apple and Google. As part of its $68.7 billion acquisition of Activision Blizzard, Microsoft has claimed that a large motivation for its purchase is to help expand its mobile gaming presence.

According to the company’s statement: “Building on Activision Blizzard’s existing communities of gamers, Xbox will seek to scale the Xbox Store to mobile, attracting gamers to a new Xbox Mobile Platform.” A graph posted at Microsoft’s acquisition site also enforces the company’s acknowledgement of mobile gaming being worth 51% of the entire gaming market in 2020.

What does this spell for audio ads?

Major brands have caught wind of mobile gaming’s meteoric rise in popularity — as they should. With this trend upward, game publishers are logically looking for ways to increase their revenue — and brands have not only figured out where the biggest audiences are spending their time, but also where they’re more likely to reach them as they experience heightened levels of engagement.

Fittingly, TikTok already has popularised an in-app background audio component and has been known to have boosted the popularity of songs through its ongoing trends — evidencing the effectiveness of audio when coupled with mobile app experiences. Netflix has also hopped on this trend, offering spatial audio to its users to enhance the cinematic experience.

As we continue to follow these trends in both the gaming and audio industries, it’s clear that audiences from both spaces can be reached through similar, emotionally-motivated strategies. Also, as the link between audio and gaming continues to become more apparent, we look forward to seeing how large brands will continue to tap into audiences and provide user-friendly experiences that sell.

Kwalee to use Audiomob's audio ads platform for its titles