The identity of the platforms at the top of the tree is far from surprising, but what's more alarming is just where their growth is coming from.

The firm's assessment states that, despite the continued expansion of the smartphone sector , Google and Apple's surge is coming at the expense of previous major players such as RIM and Microsoft.

Raw numbers suggest Android gained a total of 2.1 million new subscribers during the last report period of May.

That puts Google's platform ahead of iOS, which picked up 1 million new users of its own across the same period.

In contrast, the userbases of both BlackBerry and webOS are declining month after month, falling by 202,000 and 96,000 subscribers in May respectively. 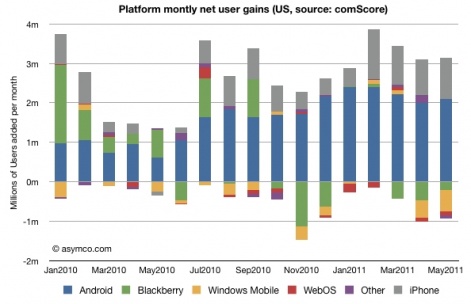 In essence, as well as picking up users new to the smartphone market, Android and iOS are forcing the userbases of their rivals down as consumers abandon RIM and HP's smaller ecosystems.

Dubbed the churn, asymco pegs the monthly rate of switchers at 1.22 percent of the total smartphone userbase.

Down, but not out?

Most alarming are the cumulative figures taken from December 2009 through to comScore's most recent report in May.

Microsoft undoubtedly steals the headlines on this score, with the firm's userbase of 18 million dropping like a stone across the 17 month period to a total of 5.8 million users across Window Mobile and Windows Phone in May 2011. 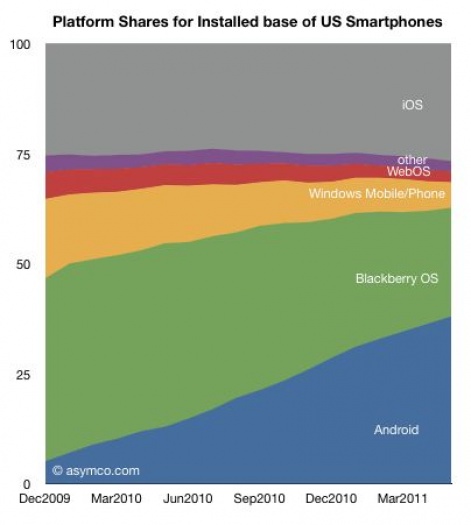 Taking into account Windows Mobile's withdrawl from the market, Microsoft has shed a net figure of around 717,000 subscribers a month since the end of 2009.

Nonetheless, founder Horace Dediu argues that platforms outside of Android and iOS will still have a role to play in the coming years, given the smartphone sector's entire userbase still sits at less than 80 million.

"Although it may seem that the situation in the US is rapidly moving toward a duopoly, it may not end up that way."