March 14th, 2012 - 05:43pm
By Keith Andrew
An analysis of consumer trends in the US by Nielsen has suggested owners of traditional handhelds are increasingly turning to smartphones and tablets for games.

Citing an increasing overlap between the sectors, Nielsen claims younger gamers in particular are susceptible to smartphone platforms, with iOS leading the charge.

In all, Nielsen claims 66 percent of households with children aged 6-12 that own either a Nintendo DS or Sony PSP have also purchased an iOS device, while the number of gaming devices in each household is also increasing.

Nielsen claims 24 percent of US consumers own two gaming devices each, with 6 percent having a total of three devices to hand.

The suggestion is, the rise of the smartphone and tablet sector is handing games developers more routes to market than in the past. 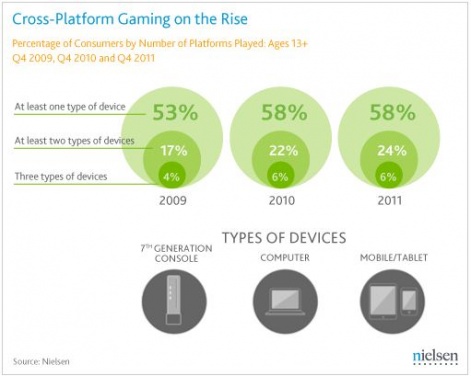 The report adds weight to claims iOS and Android are increasingly impacting the games market on more traditional handhelds, with many commentators suggesting 3DS and PS Vita's respective slow starts were, in part, down to the rise of cheap games on mobiles and tablets.

As an aside, Nielsen also concludes Android games are typically more popular with adults  24-35 year olds the most prevalent gamers amongst its audience  while iOS has a better spread across all age ranges.