The market saw a year-on-year market fall of 9.6 per cent 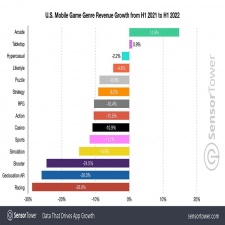 Despite the overall success of mobile gaming, most genres have seen a decline of revenue over the past year, with the market falling 9.6 per cent year-on-year to $11.4 billion.

Only the arcade and tabletop genres have seen a revenue increase, with 14.8 per cent and 0.9 per cent, respectively.

Despite revenue declining by 8.8 per cent, the puzzle genre was the largest category by spending in first half of 2022 (1H22), with $2.3 billion. Similarly, the casino genre was in second place with $2.2 billion, despite falling by 10.9 per cent.

While the tabletop genre was the second most successful of the first six months of 2022, it actually declined by 5.5 per cent in Q2, while the hypercasual genre saw a rise of 2.3 per cent. This suggests a particularly strong Q1 for the genre, offsetting the decline seen in Q2.

Downloads are a different story

The revenue statistics don’t reflect the success of different genres in terms of downloads, however. Action, which came in eighth place in terms of year-on-year revenue growth with a decline of 10.5 per cent, was the only genre to see growth in terms of downloads for 1H22, with an increase of 5.4 per cent to 54.7 million. The sports genre remained stable at approximately 66 million installs.

In contrast, the arcade genre, which saw the largest overall growth for the period, saw a 14.2 per cent decline in overall downloads. This suggests that, despite being downloaded fewer times over the period, arcade users are consistently spending more money in-game.

Despite this, downloads fell by 2.5 per cent year on year from 1H21.

Several possible factors have been cited in the decline of the industry, such as the easing of pandemic restrictions, the rising cost of living, and privacy changes. We recently wrote that the recent changes to Google’s advertising policy could hit the hypercasual genre particularly hard.

Fortnite Mobile pulled in over $15 million in 20 days

Invitation-only Fortnite Mobile rakes in $5.3 million in its first 10 days