Reanimation: The making of Dead Trigger 2 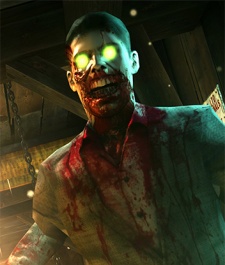 Since its formation in 2009, Czech studio Madfinger Games has developed a reputation for technical ambition, graphical prowess, and delivering an abundance of onscreen carnage.

A 2010 press release, for instance, gleefully described Madfinger's Samurai: Way of the Warrior as "one of the bloodiest games on the App Store". Subsequent games have only upped the bodycount from there.

But although the studio's thirst for violence remains intact, plenty has changed at the developer since its earliest days.

"Madfinger Games started just like any other company," explains CEO Marek Rabas. "A few people with some know-how  and the desire to do it their own way without a boss  got together and started their own thing."

"Collectively, we had worked on Mafia, Hidden & Dangerous, Vietcong, Silent Hill: Downpour, and Mafia 2, and in our downtime, we started to experiment with mobile games. It was during this period that we developed our first mobile games  15 Block Puzzle, BloodyXmas and Samurai: Way of the Warrior."

One year later, in 2010, Madfinger Games received "major financing" from private sources. The company underwent a minor rebrand  from Mad Finger Games to the appropriately forceful MADFINGER Games  and announced its "ambitious plans for a series of mass-market games."

"We released Samurai II: Vengeance in 2010, Shadowgun in 2011, and then Dead Trigger in 2012. In three years, the company grew from four to forty members," Rabas explains.

"The number of downloads grew as well," he continues. Madfinger debut 15 Block Puzzle had generated 200 downloads, but Dead Trigger would go on to accumulate 26 million.

Given that popularity, it's no surprise that Madfinger chose to build on Dead Trigger's success. What's more, Dead Trigger had arguably been the game that truly pushed Madfinger into the spotlight.

That's because, although it was Shadowgun that first caused mobile gamers and the specialist press to marvel at Madfinger's graphical wizardry, it was Dead Trigger that cemented the studio's standing as a technical powerhouse.

"We have used Unity 3D since 2009 and we really love this engine. It's powerful, easy to use, suitable for rapid development, and it supports as many platforms as we want. In my honest opinion, there is no better engine then Unity 3D for mobile games now," Rabas explains.

So, when the studio began discussing its ideas for a sequel to Dead Trigger, Unity was the obvious choice. Madfinger's existing tools and in-house expertise meant that the developer was able to "focus on things like small enhancements to the engine, such as how to use it properly or creating our own shaders."

In terms of design, however, Dead Trigger 2 was less straightforward.

"Dead Trigger 2 changed a lot during development. First we wanted to create a sequel to Dead Trigger with better visuals, better gameplay, and with bug fixes  the typical approach of developers of premium games.

"But when we started to really develop a understanding and feel for free-to-play games, we concluded that we would have to redesign Dead Trigger 2 in order for it to be a truly free to play game," Rabas says.

The first Dead Trigger had been launched at a premium pricepoint, after all, and Madfinger only flipped the free-to-play switch after the game endured an 80 percent piracy rate on Android.

It was a shift that provoked the ire of many players, and would shape the studio's relationship with free-to-play from that point on.

Free for the first time

"I think that we made a mistake by releasing it as 'paymium'," Rabas says, referring to the 99c pricepoint chosen for the original Dead Trigger. "We didn't have the balls to release it for free. We were pure premium hardcore developers and we didn't know much about free-to-play design."

What's more, Rabas tells us, "it's definitely more difficult and more challenging to create a good free-to-play game." The truth of this statement was borne out during the development of Dead Trigger 2.

So, after multiple revisions to Dead Trigger 2's core gameplay and monetisation mechanics, Madfinger decided that a kind of break with the past was in order.

The studio set itself the challenge of rebuilding Dead Trigger from the ground up, without alienating existing fans.

"We wanted to give players something more than just killing zombies, getting money and buying new weapons," Rabas explains.

"We really wanted to create something that players would find entertaining for longer periods of time, not only a couple of hours. We wanted players to experience the game to the maximum and for the longest possible period of time."

"We changed the core gameplay, we introduced hideouts [upgradeable bases], we added blueprints [weapon-upgrade collectables], we have minibosses, and we want to build a lot of things around the concept of Global Warfare, and so on. But yet it's still Dead Trigger."

One controversial aspect of this overhaul involved making Dead Trigger 2 a slightly more accessible game. The most immediately noticeable consequence of this shift is the removal of any on screen 'fire' button.

In Dead Trigger 2 guns fire automatically, leaving the player to worry about aiming and movement rather than tapping the relevant button. Although this removal affords Dead Trigger 2 players that little bit less agency, Rabas considers it a worthwhile sacrifice to make for a less cluttered control scheme.

"We gave a lot of thought to different ways to develop a better control scheme and two of our guys came up with the idea of auto fire," Rabas tells us.

The idea wasn't a popular one internally, however.

"Everybody in the team started to whine about it  including me, of course," he adds.

"They complained that it's too much, too casual, and that there was no virtue to the concept of autofire, and so on and so forth. But after a month, everybody had played Dead Trigger 2 with the new control scheme and loved it.

"My guess is that a lot of games will copy this concept sooner or later."

But many core gamers  and sections of the gaming press  are yet to be convinced by the concept of virtual joysticks at all. We put it to Rabas that, for some, mobile and tablet devices simply cannot deliver satisfying first-person and third-person shooter experiences.

"I think it's the same as when gamers and commentators were saying that first and third-person shooters simply don't work on gamepads," Rabas replies.

Since its launch less than one month ago, Dead Trigger 2 has generated roughly 8 million downloads, and Rabas tells us that the game boasts more than a million daily active users.

Its user ratings are averaging slightly lower than the original Dead Trigger's, but Rabas doesn't seem too concerned. "It's an initial release and I guess these numbers will increase as well. It's only the beginning and we will add a lot more features to Dead Trigger 2."

That attitude is suggestive not only of Madfinger's confidence, but also of its ongoing shift from a premium product company to a free-to-play service one. "We still have a lot of work with Dead Trigger 2. At this point, we consider it as an alpha version," Rabas explains.

But that transition hasn't always been an easy one. "Most of the guys in Madfinger are ex-hardcore console developers or artists. They want to enjoy development again, they want to do something which they would love to play."

So, while Madfinger may have embraced the free-to-play model, you shouldn't expect the studio to announce a raft of Candy Crush-style puzzlers anytime soon  no matter how profitable that ultra-casual fare might be.

"We believe that if we deliver good games, the money will follow," Rabas says.

"We still have to add a lot of new features to Dead Trigger 2 and to enhance almost everything currently implemented in the game. We want to make it the best free-to-play FPS game for mobile and tablets."

As for what will follow Dead Trigger 2, Rabas keeps it tantalisingly vague. "We are working on something really different," he explains. "I don't know if we even can call it a game... But it's too soon to reveal any details right now."

But whatever the nature of this curious non-game, it seems safe to assume it will be built with Unity, display some hardcore leanings, and feature some form of virtual violence.