The Charticle: The global performance of Big Fish Casino 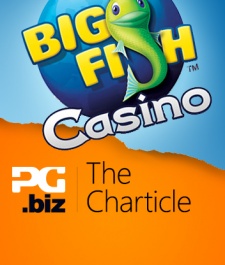 The key driver behind Big Fish's growth in 2013 was Big Fish Casino.

Revenues from the social casino games were up 250 percent across mobile, Facebook and web.

It's a good opportunity, then, to take a look at the game's mobile performance in different countries.

As we'd expect, the US is the key market; not only is it the leading world market for mobile games, but it's the market that's most attuned to casino games.

In this respect, Big Fish Casino has done very well. Over the past year, it's remained solidly in the top 20 top grossing iPhone chart (apart from a short drop into the top 40 during August).

When we look at the big European markets, however, the game's performance is much more volatile.

It's entered the top 20 top grossing iPhone chart in Spain, but it's never held a sustained daily chart position within the top 100, with in-app purchases seemingly being locked to a weekend play pattern. Again, as with the US, the summer months see a collapse in chart position.

Big Fish Casino did somewhat better in Germany, particularly during autumn 2013, but France and Italy are as patchy as Spain.

(The UK isn't included in the analysis as Big Fish was running a real-money gambling version during the majority of 2013).

Our final country to check out is China. Big Fish Casino wasn't released in Korea and didn't have any impact in Japan, where casino gambling is illegal.

In China, Big Fish Casino started 2013 on an up, only to fall away, only reaching back into the top 100 iPhone top grossing on a few occasions. Of course, China has its own culture of gambling games, while Big Fish Casino focuses on the key western forms such as slots, blackjack, poker etc.

So, when it comes to casino games, it's America or bust.