The world through your phone 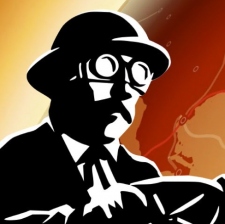 Joe's core duties at inkle involve a combination of visual design and programming, allowing a synergy between the two disciplines that is rare in the industry.

Before co-founding inkle, he worked for six years in the console videogame industry working on every platform from Nintendo DS to Playstation Move and Xbox Kinect in a career at Rare and Sony.

If you've played inkle's engrossing text adventure game, 80 Days, then you'll know that it's one of the most absorbing and imaginative titles to be released in 2014.

80 Days' crisp visuals, painstaking attention to detail, and unique steampunk world come together to create a text adventure that feels more real, and more natural, than most of today's gritty, grounded, and grey triple-A titles, which work so hard to find a foothold in reality.

Of course, in an era where players are used to being spoonfed exposition, releasing a game that relies so heavily on text and player imagination is a huge gamble, but, as we found out during our chat with inkle duo Joseph Humfrey and Jon Ingold, the team wouldn't have it any other way.

"Like every project I guess, it's part of a continuum for us, so before we did 80 Days, we did the Sorcery  games, and before we did that we did a project with Profile Books, who collaborated with us on 80 Days as well," explains Ingold.

"We also worked with an author called Dave Morris, whose adaptation of Frankenstein we did, but not many people have heard of that because it was marketed as a book, rather than as a game.

"Still, before we did any of those things we were working on founding our company, and trying to work out what it was we were interested in doing.

"We started off by saying 'let's make stuff with text', because it lets us do things, and tell stories, that are much more ambitious. It gives us the ability to go to lots of different places without being restricted by any game mechanics."

80 Days certainly is an ambitious project, but, thanks to experience gathered during the development of previous games such as Sorcery, the foundations for inkle's latest tale were laid long ago.

"With Sorcery we introduced the map layer, partly because it's beautiful, and partly because it proves you're going off on one path and not another. It shows that the story is branching," says Humfrey.

"80 Days is an extension of that concept, and we wanted to really ram home that every single choice people make, out of the 500,000 words and 10,000 choices that our script has, genuinely matters.

"The idea of putting people on a globe, and then showing them were other players are, and giving them a hint of what was happening to them, would really force people to accept that their choices made a difference."

The best ideas can hit you when you least expect it, but the inkle team seem to strike gold whenever they visit one place in particular.

Occasionally an idea comes along that just seems so elegant, that we can't not do it.

However, they don't retreat to the quiet zen of a Japanese garden, or sink into deep thought beneath piles of books in a picturesque library. No, they go to, arguably, the home of all great ideas. They go to the pub.

"We were chatting in a pub, just talking about things, when we happened upon the idea of Around the World in 80 Days," says Ingold.

"We talk a lot in the pub about various ideas, but occasionally an idea comes along that just seems so elegant, where everything just seems to fit together, that we can't not do it. That's what 80 Days gave us as a concept."

After that, the team never looked back, and they soon found themselves in a state of perpetual growth and iteration. 80 Days continued to gather momentum: unravelling and expanding, seemingly of its own accord.

"The game did grow quite organically. I remember Joe, again, sitting in a pub at the back of the world, asking if we had the right number of cities, because we had about 20," laughs Ingold.

"After that, Meg Jayanth, our researcher and writer, came back to us with research on all of these random cities we'd never heard of.

"She'd find out something about a place called Lahore in India (now Pakistan), and, even though we didn't really know anything about it, we thought we'd better include them because she'd already written them in.

"As we play tested the game it became clear that forming complex journeys through lots of different locations, such as the wriggling around you can do in Europe, was really gripping, and that just forced us to write more and more."

Even when 80 Days became a reality in its most basic of forms, the inkle folks didn't even think about stopping there. After all, explains Humfrey, that's when the work really starts.

"We work incredibly iteratively, you know, in terms of our planning, and the scope of the game, it was a process of iteration. We did a first version and then we started added layers of detail, like the way a painter fills a canvas," says Humfrey.

"My art teacher always said 'make sure the canvas is completely covered in paint, and then you've started'.

"Meg would deliver the script for a city, and each journey, and - because Meg was really focusing on building the world, the characters, the language, and the voices - I'd then take that script and layer in a bit more logic," adds Ingold.

"Of course, even that was very collaborative, and it became quite a nice process towards the end."

Designing and developing a game with a small team isn't without its risks, but, as they were making 80 Days, Ingold and Humfrey realised that less really is more.

"With a project of this scale, if we'd have done it with 20 people, I'm not sure it would have been faster because we'd have spent so much more time explaining things," explains Ingold.

"To counter that problem, we make sure we only work with multi-talented people so that, essentially, with each team member, you're getting two in one.

"It's a very tight-knit process, which is a real joy actually, especially after working in the console industry for a while and watching people, whether they like it or not, get pigeon holed into doing a specific task: like becoming the programmer who's in charge of doors.

"You quite often have a rush of good ideas, with one idea unlocking two or three others, and with a team of our size you can often sit down with everyone and present those ideas as a whole."

One of inkle's biggest concerns was that players would get fed up of the game if they failed to beat it quickly.

The divergent nature of 80 Days' gameplay means that each journey around the world should feel unique, however, because of its text heavy nature, which demands high levels of engagement, the team were worried that players would surrender their interest without a fight.

Fortunately, on this occasion, they were wrong.

It's a very tight-knit process, which is a real joy actually, especially after working in the console industry.

"Some people play the game and complete the trip in 62 days and think it's really easy, while other people say they got back on day 152 but still enjoy the game because they 'had a really nice time'," says Ingold.

"I was really worried that if after 3 attempts people still hadn't completed the journey in 80 days they might get put off, but what we've found is that those people don't mind failure because they've loved each trip they've been on.

"It's funny, because looking at the statistics, the mean and the median trip length are almost spot on 80 Days, which, we love to attribute to perfect game balance, but don't think any game designer could hope to get their game that well balanced."

Even though 80 Days has drawn praise from all corners of the globe, the team are reluctant to typecast themselves. Instead, they're looking to explore new horizons in search of a fresh challenge.

"It's tempting to sort of say we've got our genre now, so let's do The Odyssey next, but I don't think we could face that because 80 Days was such hard work," finishes Humfrey.

"I'd love to do a game that has the sort of style you'd see in a graphic novel, so you'd have some dialogue but with some narrative elements intertwined. I really like that idea."

Thanks to Jon and Joe for their time.