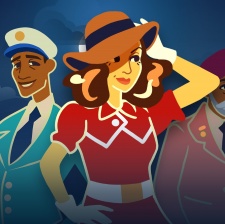 The process of creating a game is difficult, long, and stressful.

This week, we spoke to Inkle Studios creative director Jon Ingold about the development and launch of Overboard, a cross-platform atypical murder mystery set on board a train.

PocketGamer.biz: Where did the initial idea for Overboard come from?

Jon Ingold: Overboard was two ideas that came together. The first was a question: if we made a game in just one month, what would it be like? The second was an inspiration: I was listening to a radio adaptation of Murder on the Orient Express and thinking, no one has really captured the 1930s “golden age” detective story in a game yet.

One difficulty with a game like Overboard is making sure that the story is really, really solid.

We put those ideas together and thought: let’s make something really fast, and really fun, that captures that 1930’s spirit. But, of course, with the killer twist, that you’re not the detective, you’re the murderer.

In the end, Overboard didn’t take just one month - but it did take just 100 days. And part of the design goal was to make things quickly and reusing ideas, code and designs that were used before. We’re a team of four people, and we primarily wanted Overboard to be fun to build. So we tried to make sure no one was doing anything they didn’t enjoy doing.

But that didn’t mean we were making something simple! We’ve got existing technology for automated testing, for deploying builds to multiple storefronts, for gathering beta-test feedback, for doing slick UI animations. On top of this, we have ink, our scripting language for doing hyper-response interactive fiction that remembers everything you do in the course of the game (and allows other characters to remember everything they’ve seen!)

So making sure that whichever way the story went, it made sense, didn’t contradict itself, and had a satisfying conclusion was really hard. But it was also really fun.

We had a full script of the game from beginning to end after just 3 weeks. It wasn’t very broad – there are lots of things you can do in the final game, and secrets you can uncover, that weren’t in there yet – but the basic framework of events was there.

There was no art, no UI design, and it was playable in text boxes in Unity. And we played it, and it was really, really fun. We even had a few people playtest it and we found them having a good time! So from there, everything we did was to add content, add polish and add value.

Launching a game by surprise is a really nerve-wracking experience,,,

Are you happy with the game's launch so far?

Definitely. Launching a game by surprise is a really nerve-wracking experience: five minutes before the game went live we had no idea if anyone would be into the concept, or even noticed that it existed!

Now a month later, Overboard has one of our best first-month-of-sales ever – and the reactions from players and critics have been really, really great. We’ve loved seeing how people are getting into being the worst Veronica (the player character) they can possibly be.

With a game like Overboard that handles so many different playthroughs and ways the story can go, adding more side stories or characters makes this much, much more complicated. Everything in the game impacts everything else!

So we’re not planning any updates: we’re going to keep it as it is – perfectly formed.

We’ve always loved mobile as a platform here at Inkle. Designing for mobile is about finding a satisfying balance of immediacy, depth and our style of complex narrative gameplay is a great fit for that.