How to infect the world in 6 days flat

March 12th, 2013 - 12:33pm
By Simon Parkin, Contributing Writer
If you set out to improve upon a game by another developer, should you be surprised when the release that results arguably proves to be more popular?

James Vaughan  the man behind iOS hit Plague Inc. - claims he has "always very been open" about taking inspiration from the Pandemic series during the development of his game, though his dismisses any notion that his game is a clone.

Rather, he set out to take the ideas behind Pandemic  aiding the spread of a deadly virus across the globe  and push them on further. If downloads to date are anything to go by, that's a goal he's more than achieved.

We caught up with Vaughan to find out how Plague Inc. came about, and what he and his studio  Ndemic Creations  plan to do next.

Pocket Gamer: Can you tell us a bit about your story pre-Plague Inc.?

James Vaughan: I'm 25, live in London and have an Economics degree from Nottingham University. Until recently, I was a strategy consultant for a multinational consulting firm.

I've always loved computer games and played a lot of them  particularly strategy games. Some of my favourites: Civilisation, Half Life, Starcraft, Supreme Commander, Sword of the Stars, XCom.

Before Plague Inc., I had never worked in the games or software industry but when I was younger, I used to make maps and scenarios for a wonderful game called Age of Wonders - Shadow Magic. I think this taught me some useful lessons, which helped me make Plague Inc.

When did you decide to make a game?

Back in 2011, I decided that I wanted to give myself a challenge, to do something a bit different and entrepreneurial. I played around with a few ideas but none of them really grabbed me.

Whilst I waited for the perfect idea to come along, I decided to be a bit more creative and make a mobile game as a hobby. Like many of people, I've always had loads of game ideas and I thought it would be cool to actually make some of them a reality.

What was your initial ambition for your game?

I was doing this as a hobby - I was doing it for fun, not to make money so my ambitions were pretty low. Also, I had read all over the internet how hard it was to succeed on the app store so I didn't want to get my hopes up.

My success criteria was very simple - make and release a game that I was proud of. My stretch goal was to not make a loss on the game  i.e. make back my development costs of more than $5,000. 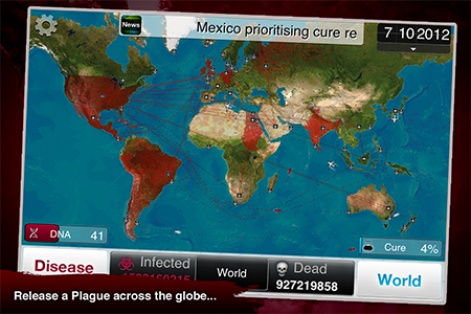 In what ways did you seek to differentiate your game from Pandemic?

A key inspiration for Plague Inc. came from a 2008 Flash game called Pandemic 2 and I have always been very open about this. 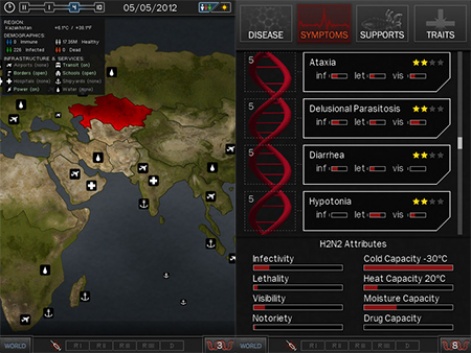 I thought that it was a great game but that it could be so much better so, I decided to make the game that I wanted to play. I completely agree with a comment you made several months ago - "[Plague Inc.] is unquestionably the better game. But it is also unquestionably a game that wouldn't exist were it not for Pandemic."

The first thing I did when writing my design document for Plague Inc. was to clearly outline how Plague Inc. would innovate and expand the genre created by Pandemic.

There is no honour in mindlessly copying someone else's game - I wanted to make absolutely sure that Plague Inc. could innovate enough to be a unique game, standing strongly on its own - to be something I could be proud of.

I made Plague Inc. my dream game by adding deeper narrative, giving the player more strategic choices, providing graphs and data lists and vastly increasing the realism of the world.

Since the release of the game, I have kept expanding the game by adding in new gameplay mechanics  e.g. the Necroa Virus update adds a zombie plague with active abilities'  a way for the player to impact specific countries.

What was the development like? Did you hit any snags?

I had never made a game or piece of software before so I was always expecting development to be a challenge - especially with an extremely limited budget!

Freelancers were essential in development of Plague Inc. as they provided the many skills that I lacked.

The programmer - Mario - created the game engine to hold my algorithms, the graphics designer - Sofia - turned my horrible wireframes into beautiful art and the sound designer - Joshua - gave me the music and sound effects I needed - his daughter sings the Ring a Roses song inside the game.

The great thing is that we are all still working together on updates for Plague Inc.

One of the more complex parts of development for me was getting the world of Plague Inc. to feel truly realistic  the algorithms that make up the game are extremely complicated with hundreds of variables. I tweaked and experimented with them for months  making changes all the way up until release.

I modeled them all in Excel but the only real way to see how they feel is to play the game and that took time.

I think the biggest snag was when one of the team had to focus on other work for a few months  this effectively put a stop to development for 2 months and was extremely frustrating as the game was pretty close to completion. I began looking for a replacement but happily they were able to come back and get things finished.

What were your expectations when you launched?

I had no expectations  I was just happy to be releasing the game.

I was actually on holiday in Ireland with my girlfriend and was completely unprepared when the game launched - Apple reviewed the game very quickly.

I woke up one morning, saw that it had released and instantly jumped out of bed to email all my friends about it and read player reviews. 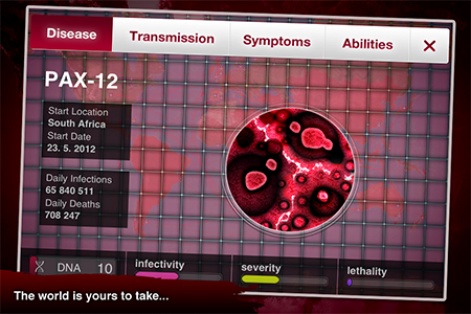 It seemed like the game became an overnight success. Was this true and, if so, how did this happen?

All of this happened with no advertising, marketing or featuring - it was a very surreal or exciting time for me and it was so brilliant to see so many people playing my game and enjoying it.

The tale of a true indie rising up the charts on iOS is becoming rarer all of the time. Why did it happen to your game?

Heh, you are completely right and "Why Plague Inc.?" is the million dollar question!

I can't say for sure but I think Plague Inc. rose up the charts for one key reason: It sits firmly in an underdeveloped niche - intelligent, realistic and sophisticated strategy games - and so is unlike any other game on the app store.

This helps it grow organically and spread virally  people want to tell their friends about this cool new game they have found which is so different to other games.

Crazy as it sounds; Plague Inc. was one of the most significant mobile success stories of 2012 with over 200 million games played. It defied all expectations and topped the charts for the rest of the year.

Work hasn't stopped on Plague Inc. though. I have released a number of major content updates to the game, which included 'genetic modification'  a new way to customise your plague and two special plague types  the mind-controlling Neurax Worm and the zombie-creating Necroa Virus.

I am also keen to get Plague Inc. to as many people as possible through localisation and porting. In October, Plague Inc. was released onto Google Play and the Amazon App Store where it has done extremely well.

The game is also now available in German, Spanish, Brazilian Portuguese, Italian and French. There is a lot more to do here though  more languages and more platforms!

A year on, in what ways has your life changed?

The only real change for me is that I quit my old job as a strategy consultant and now I work on Plague Inc. full time through my company Ndemic Creations.

This is great as it lets me work on cool new updates and bringing the game to as many people as possible. Its also brilliant fun and I'm getting to meet loads of cool developers  I really am having the time of my life at the moment.

What's your next move?

This year, Ndemic Creations will be working on Plague Inc., follow up games and brand new games - my main constraint at the moment is game designer time - which is down to me - and programmer time, which is on Mario.

Very soon, I will be looking for one or two passionate programmers and game designers to join the team  this is only the beginning for Ndemic Creations. I