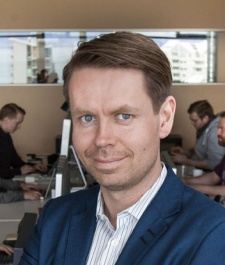 It's been a busy year for Icelandic developer Plain Vanilla.

'Especially for the CFO', jokes founder and CEO Thor Fridriksson.

"It's crazy. To do three funding rounds in a year. I'll give him a holiday next year."

But following the news Plain Vanilla has taken its total funding to more than $27 million, with a further $22 million injected by existing investors including Sequoia Capital and Tencent, holidays will be in short supply for the rest of the 35-strong team.

The reason for this new funding round, coming just a month after Sequoia and Tencent dropped $2 million is that Plain Vanilla's QuizUp trivia game is the hottest app in the US.

"We launched the game and the level of success was a total surprise," Fridriksson says.

"I was being contacted by so many investors, but in the end we decided to do an insider-only round."

As part of the deal, Sequoia's partner Roelof Botha (ex-PayPal CFO, and an investor in Unity, Tumblr and Jawbone amongst many others) joins Plain Vanilla's board; something Fridriksson will be important as the company looks to make the most of the opportunity it has to expand its social presence.

As for his 'total surprise' at the success of QuizUp, Fridriksson explains he's talking about how quickly it's reached its scale, not its potential.

"We knew trivia was always popular and that our gameplay was simple, so it's been a question of keeping the content fresh and growing," he says.

What's really been surprising, though, is how QuizUp has built communities, what he calls the game's killer feature.

Launching with 250 topic categories, this granularity, combined with the in-app chat and discussion features, has resulted in some highly engaged communities.

As an example Fridriksson points to the Physics category, in which players are posting essays about obscure theories, as well as asking about cute girls.

Overall, the game is generated over 100,00 posts a day. Not bad considering its 1 million daily active users.

Yet there are two challenges QuizUp must overcome to secure success in 2014.

The first is to prove the games isn't a fad.

The cautionary tale in this respect is OMGPOP's Draw Something, which reached similar levels of virality in the US in 2012, only for the bubble to burst just as Zynga spent $180 million buying the company and game.

Fridriksson reckons QuizUp's social features will be key. "We have much stronger social aspects than those games you call 'fads'," he explains.

The other challenge is just how Plain Vanilla will monetise its audience.

At present QuizUp has virtually no in-app purchases, at least none that anyone would be interesting in buying. And Fridriksson says he's not interested in milking his audience for short-term cash by using in-game adverts.

"I hate ads," he states. "We'll only add monetisation that enhances the game experience."

Quite what that will be remains to be worked out. Fridriksson suggests QuizUp can work with brand and content partners to create bespoke quiz channels for films. Prior to QuizUp, Plain Vanilla released an app about Twilight and also worked with National Geographic.

Perhaps the most obvious early opportunity for largescale monetisation will come courtesy of Plain Vanilla's other big investor, however.

Chinese internet giant Tencent is currently shaking up the Chinese mobile game market with its 300 million-strong WeChat mobile social network and it has aggressive global plans too. Releasing a version of QuizUp for WeChat would be highly valuable for Tencent as it looks to competes against rivals like Kakao, LINE, WhatsApp and Tango in 2014.

At present, however, Fridriksson remains tight-lipped about such specifics.

"We'll be releasing on iPad and Android and a host of other platforms, as well as releasing more language versions of QuizUp," is all he will say.

That will be enough to keep its development team warm and working hard during the long Icelandic winter. Holidays will just have to wait.