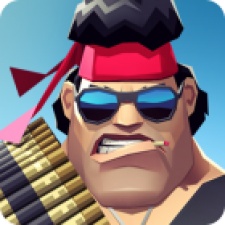 When PocketGamer.biz profiled Derby, UK-based studio Eight Pixels Square back in January, co-owner Hugh Binns was confident that the shooter genre on mobile was still there for the taking.

The unspoken subtext behind this was that the then-unannounced RAID HQ - now available on the App Store - was already quite late into development at the time, and was shaping up to be an incredibly important game for Eight Pixels Square and its place in the mobile market.

Having now come out of soft launch and into the world, PocketGamer.biz caught up with Binns to talk a little about the card-based shoot-'em up and its evolution during development.

PocketGamer.biz: You've spoken previously to PG.biz about your ambition to "crack and dominate" the shooter genre on mobile. Do you consider RAID HQ your best effort yet?

Hugh Binns: Yes, and we hope that players feel it’s our best game yet.

We believe there is a huge opportunity in the shooter space on mobile, and RAID HQ is very much the culmination of all our work so far to create an innovative and engaging game in this genre.

What inspired you to drop the over-the-shoulder view and opt for a more old-school, top-down, shmup-style experience?

RAID HQ started out over-the-shoulder and we'd been tweaking the camera on it for a while. While working on that, the coding team had (almost by accident) moved the camera to a top down view and we thought it looked really interesting.

We moved the camera to a top-down view almost by accident, and thought it looked really interesting.

At around the same time, we were looking at our soft-launch metrics and user testing feedback under the old camera view.

We wanted to make the game more accessible, as well as being better able to balance the skill levels so we could keep challenging players of all ability as they progress through the game.

Our team are big fans of old school shoot-'em-ups, and had been playing many of the mobile shmup games that were out at the time. It was a big decision, but we decided to test the new camera view in soft launch at end of last year.

The results were really strong, with a higher level of player engagement, better retention, improved skill progression and a positive reaction from players.

Where/how long was RAID HQ in soft launch? What were the most useful findings during this period?

We had an extensive soft launch, beginning back in September 2015 in the Philippines and Indonesia, Vietnam and Thailand.

The game has a complex back-end infrastructure including PvP matchmaking, gifting and social features, global chat, leaderboards, leagues etc. - we needed to build up a sizable community to help us test, refine and balance our game before we went live worldwide.

Our initial focus during soft launch was on optimising performance, then shifted to retention and engagement metrics, before focusing on monetisation in New Zealand, Canada, Sweden and the Netherlands.

We ran several A/B tests to help us understand our player’s behaviour, and made many changes as a result to areas like on-boarding, balancing and our in-game economy.

We also made some pretty big changes to our core gameplay (as you’ve noted above), the squad upgrade system, and the design and flow of our UI/Menus.

Outside of the game, the soft launch also meant we can test highly targeted marketing campaigns and creative assets (including static ads and video) to see which really resonate with players.

How useful did you find working with Player Research, and did it change the way you think about UX design? Do you think it's something more devs should be aware of?

This is the second time we’ve worked with Player Research, and it’s been even more useful this time around.

This is the second time we’ve worked with Player Research, and it’s been even more useful this time around.

We’ve been impressed by their scientific approach, their focus on actionable data and their expert analysis. We made a number of changes to the game and UX based on their findings, and it was also helpful to simply validate other decisions we’d made.

I think it’s something other devs should definitely be aware of, alongside their own testing, analytics and peer reviews.

How did you begin working with Chorus Worldwide to release the game in Asia? Are the Asian markets key to your strategy with RAID HQ?

Chorus came highly recommended by a number of other independent studios we are close to.

Asia is definitely a key focus for us, especially given our game’s key features like PvP, its social features and the gacha-based squad design.

We wanted to ensure we have the highest quality experience possible for players in each (very distinct) country, including localisation, marketing & PR messaging, and the way the game is presented on each of the local App Stores.

Chorus have been a great partner to help us with our strategic goals.

You can download RAID HQ on the App Store.