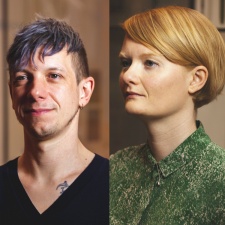 Video games have hit museums before, but rarely with as big a splash as the V&A's latest dive into the interactive medium.

Looking back at past attempts to bring games into museums, Foulston found there was space to do more than simply show the museum-going public that video games exist

“We were always aware that it was seeking to do something radically different,” says Foulston. “We weren’t creating a retrospective, this wasn’t just an arcade in a museum. A lot of the approaches that we took were trying to find a new curatorial language for video games.”

That hasn’t stopped the exhibition from hitting with visitors who didn’t consider themselves gamers and has opened up a perspective on games that isn’t entirely visible to the wider world.

“It’s like people coming with their mums thinking ‘this isn’t something I’d want to see, generally’, but when they’ve gone through the entire exhibition they realise the amazing creativity that goes into producing video games," says Volsing.

“I’ve noticed a really positive reaction to the disruptor section, where they look at personal, political, nuanced stories," he continues, bringing up a central room containing a look at how games handle race, violence, politics and sexual issues.

“There was an amazing response and people really engaged with that.”

Of course, the video games exhibition first kicked off in London last autumn. Dundee is quite a departure from the capital, in a brand new building, but the changes aren’t as shocking as you’d expect.

The exhibition space itself is remarkably similar to the Kensington show, as Foulston comments: “It’s quite surreal for us, you’re looking out and it looks identical. That said, the local curators did personalise the exhibition and did a lot to bring in new content, with new cabinets.”

But while Dundee might be magnitudes smaller than London, it’s left an equal - if not larger - mark on the UK’s video game culture.

“North London has a very vibrant and strong games community, but it’s not as iconic as Dundee in its history and legacy of games design," explains Foulston. "It’s a huge honour to have the exhibition come to a space where it’s so warmly supported by the local games community.

“Even if you’ve seen the show in London, it’s definitely worth even seeing the changes in the final room of the exhibition.”

For Foulston, the exhibition hopes to capture an unpredictable period in gaming history that’s been happening since the late-00s.

“That story that we’re telling is this is a period of disruption, of change, that we’re seeing from independents all the way up to triple-A studios," she says.

Much of the exhibition is devoted to showing how games development has become more open and accessible to voices who may have previously been kept out. That’s only going to ramp up, but only if the scene can work to make it happen.

“We understand and celebrate that it has happened, but we need to do everything that we can do as a community to support that diversity and the beginnings of a democratisation," says Foulston.

Chipping in with a more general perspective, Volsing adds: “From a wider audience point of view, it’s engaging people who don’t think video games are for them. It’s a medium that people are engaging with and can talk about new, personal stories with.”

Foulston concludes: “The future for games is exciting if we’re able to bring in and empower diverse and eclectic people. They don’t need to be caught up in stereotypes that overshadow the discipline.”